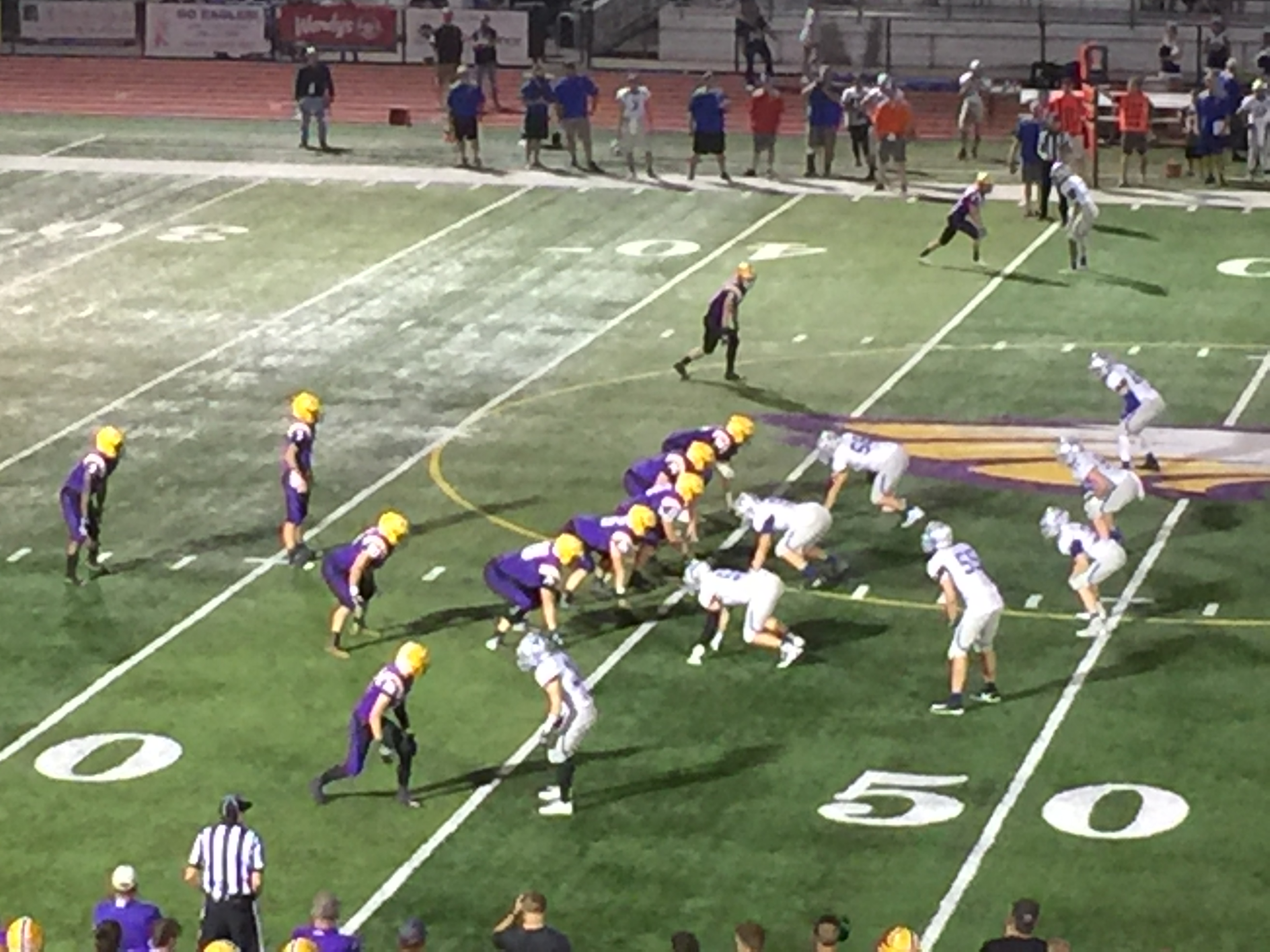 Tonights recap is brought to you by Crystalina’s Pizzeria visit them at 36962 Detroit Rd, Avon, Ohio or call 440-933-1011 online orders at www.crystalinaspizzeria.com, #thechoiceisCrystalclear

AVON, OHIO– The Nest was rocking, Joe Firment Stadium in Avon was filled to the rafters, and an absolutely picture perfect summer night in late September welcomed the most anticipated football game in all of Lorain County.

The Avon Eagles and the Midview Middies, the top two teams in the Division II, Region 6 state computer rankings were set to settle the score on the field. What unfolded left Northeast Ohio with no doubt as to where the road to the state playoffs begins, Avon.

The Eagles ran early, ran often and ran over the Midview Middies, 42-21, in a game that wasn’t as close as the final score. The Avon offensive line and run game were no match this evening for the very game but very overmatched Middies.

Led by QB Ryan Maloy, 13-of-19, 181 yards, one TD, and 15 rushes for 117 yards and one TD, the Eagles went on a first quarter 79-yard drive capped off with a 13-yard run by RB Nick Perusek that gave the capacity crowd a sense of what was in store for the night.

Early on, however, Midview hung tough led by quarterback Seamus Higley, and the Middies marched right down the field themselves with a methodical eight-play drive that stalled at the Avon six on a fumble. The quarter ended 7-0 Eagles.

The Middies held and forced an Avon punt and drove 52 yards in five plays when Higley found WR Zac Gill from 11 yards out to tie it 7-7 early second quarter. But right back came Avon, a mix of perimeter runs by Maloy and power bursts by Perusek and Tony Eberhardt, the Eagles cashed it in when Mark Steinmetz waltzed in untouched from nine yards to take a 14-7 lead.

After Midview blocked a FG, they took over at their own 39 with only 51.1 seconds left in the half. It took them only six plays to get inside the Avon 10 when possibly the biggest play of the game, an interception, took the wind out of them. They never recovered.

Avon took the second half kickoff and on the second play of the drive Perusek burst up the middle, broke a tackle at the Midview 40 and was gone, a 74 yard back breaker to take a 21-7 lead. The third quarter was mired with unnecessary penalties by both teams, four personal foul penalties, including one by Midview head coach DJ Shaw which led to another Maloy TD run of 24 yards. The 28-7 lead looked too much to overcome.

Midview QB Seamus Higley finished the night 20-of-38, with 266 yards, three touchdowns and one interception. WR Nick Crum caught five passes for 62 yards and a score. WR Ben Gendics had two catches for 69 yards and his TD. RB Conner Wolfe couldn’t get it going until the second half and finished the night with 19 carries for 120 yards.

Midview, who falls to 4-1, tries to get back on track next week as they visit Berea-Midpark and Avon, still unbeaten at 5-0, travels to Westlake to meet the Demons.