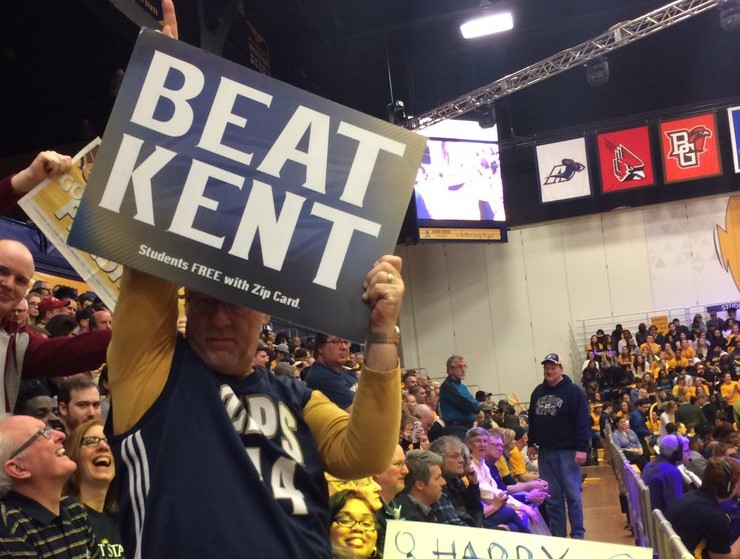 KENT, Ohio – When the Kent State Golden Flashes and Akron Zips took the floor at the M.A.C. Center on Friday night, both teams had a lot at stake with a win.

The visiting Zips looked to avenge the loss two weeks ago at Rhodes Arena that put an end to their 30-game home winning streak. Akron also needed a win to get some momentum back heading into next week’s Mid-American Conference tournament. The Zips had lost three of the previous four games.

The host Flashes looked to record a season high sixth consecutive victory and sweep their next door neighbors for the first time since the 2009-2010 season. Kent State also hoped to earn the number four seed in next week’s Mid-American Conference tournament with a victory and some help.

Akron led the entire first half. The Zips built a nine-point lead early in the first half. Kent State would cut that lead down to one. The Zips would take a four point lead into halftime at 32-28.

The Flashes started the second half with a none to four run. Kent State took its first lead of the game with 17:07 remaining. Jaylin Walker’s three pointer gave the Golden Flashes a 37-36 lead.

Both teams would exchange baskets before the Zips took control of the game.

A jumper by Walker with 4:57 remaining would be as close as the Flashes would get the rest of the way.

The Zips and Flashes split the regular season series for the fifth consecutive season.

Akron finishes the regular season as Mid-American Conference champions. At 24-7 overall and 14-4 in the conference, the Zips are the top seed in the MAC Tournament next week at Quicken Loans Arena.

Here's your 2017 MAC Men's Basketball Tournament Bracket. We will see you at @TheQArena! #MACtion pic.twitter.com/cxhe1XT6kK

The Zips receive a bye into the quarterfinals. Akron will play the winner of the eight vs. nine seed game between the Eastern Michigan Eagles and the Northern Illinois Huskies on Thursday March 9 at noon.

Akron will now play in MAC Tournament Quarterfinals on Thursday at Noon. We'll be facing the winner of the Eastern Michigan/NIU. #ZipsUnite pic.twitter.com/L5EHGxCuuI

The Golden Flashes finish as the sixth seed. Kent State will host the Central Michigan Chippewas and the NCAA’s leading scorer Marcus Keene on Monday, March 6 at 7 p.m. at the M.A.C. If the Flashes win, they will take on the third seeded Buffalo Bulls at Quicken Loans Arena on March 9 at approximately 9 p.m.

MAC Tournament play begins on Monday for No.6 @KentStMBB when No.11 Central Michigan comes to town. #Unleash pic.twitter.com/cJvqBHeyqD

If there is a rubber match to determine who has bragging rights for the offseason. The Zips and Flashes would both have to advance to the Mid-American Conference Tournament championship game on March 11.