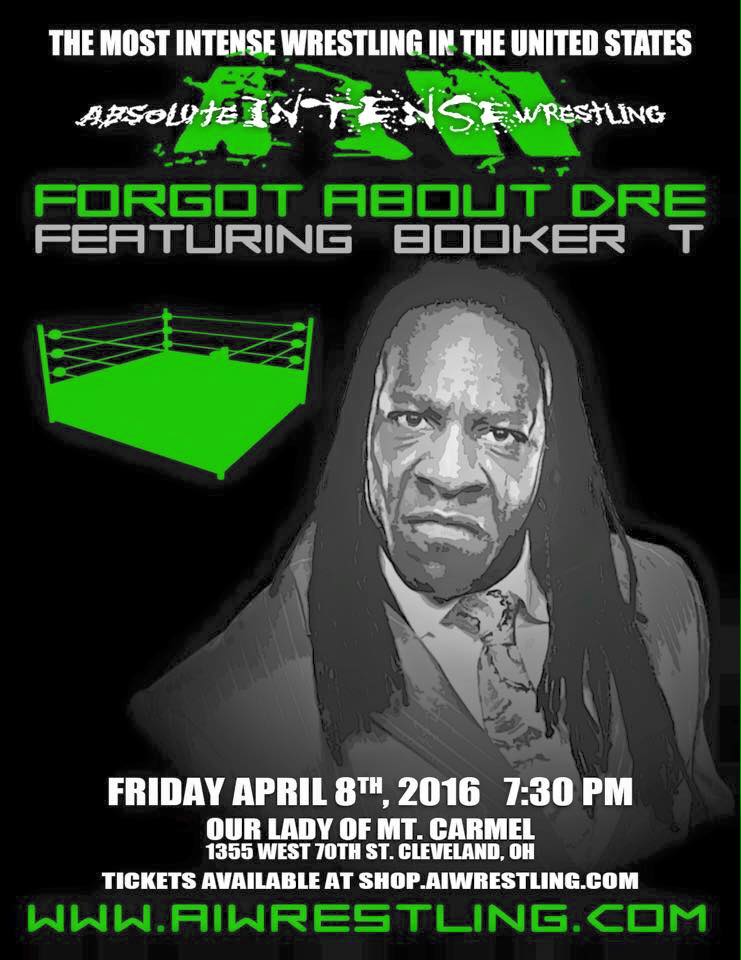 BOOKER T will be there signing autographs and selling his new book from 6pm-8pm!

Singles Match
Facade vs Joey Janela
Last month at Gauntlet For The Gold 11, Joey Janela made his AIW debut in a fatal four way. Janela went for an outside dive during that match and crashed into the barricade. In this match fans are bound to see some high flying action. Facade last appeared at Fullest House (We Hope!) and came away with a victory in a fatal four way. Will Facade come away with the victory or will Janela pick up his first win in AIW?

Triple Threat Match
Rex Brody vs Grado vs Space Monkey
This match is going to be filled with entertainment…no doubt. Grado makes his return to AIW for the first time since No Sleep Till Brooklyn in December. Rex Brody is coming off of a match against Jerry for the Intense Title but defeated Rockstar Spud back at Fullest House. Space Monkey will be looking to come away with his first victory in AIW. Anything is possible in this match but one thing is for sure, you will be entertained.

6-Way Scramble for the Intense Title
Jerry (c) vs BJ Whitmer vs Alex Daniels vs Britt Baker vs Frankie Flynn vs Joshua Singh
During Gauntlet For The Gold, Eddie Kingston had a match against Frankie Flynn, in which Flynn defeated Kingston. After the match Kingston quit AIW. During the Gauntlet, Kingston’s manager, The Duke brought out his new client BJ Whitmer. Also during Gauntlet For The Gold, Alex Daniels won a six-person scramble match, which was his second in a row against the other AIW trainees. Jerry retained last show against Rex Brody. With five other competitors going for the title, the odds are not in favor for Jerry to retain. Will Jerry overcome five other competitors to retain his Intense Title? Will we have a new Intense Champion?!

Singles Match
Alex Shelley vs Johnny Gargano
Back at Hell On Earth 11, Shelley was defeated by Louis Lyndon. After the match, Shelley said that he wanted to face Gargano one more time. During the last show Shelley faced off against Candice LeRae. Shelley decided to attack LeRae post match until Gargano made the save. With the rumors of Gargano being signed to NXT, this can be Gargano’s last match in AIW. Will Shelley defeat Johnny? Will this be Johnny Gargano’s last match?

Fatal Four Way Match
Laredo Kid vs Louis Lyndon vs Candice LeRae vs Cloudy
Laredo Kid will be making his AIW debut. Laredo Kid has had tryouts at the WWE Performance Center previously. LeRae is coming off of being defeated by Alex Shelley last show. Cloudy was in the Gauntlet last show but before that appeared in a fatal four way back at Fullest House. Lyndon wrestled in a fatal four way during Gauntlet For The Gold and also appeared in the Gauntlet. Will Laredo Kid come away victorious in his AIW debut?