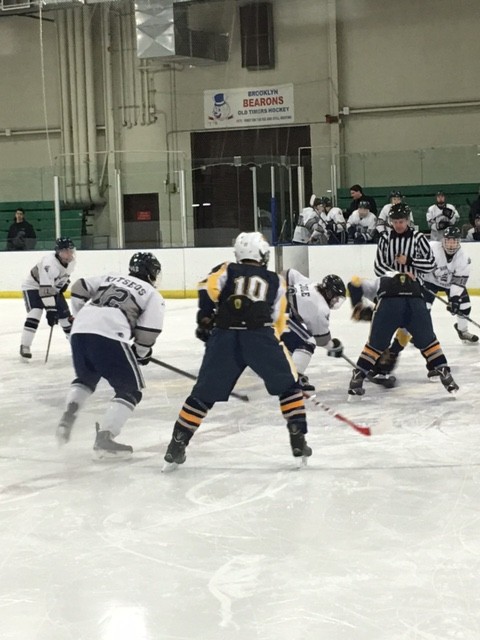 BROOKLYN, OHIO – The Solon Comets and the Explorers of Hudson had met twice before their quarter-final match up of the Baron Cup I tournament with both teams taking a win splitting the 2 game season series.

Both teams look to advance in the tournament to take on Rocky River, who advanced by defeating Mentor 3-0 just half an hour before their own game.

However, Niko Wu had a goal taken away from him due to a pre-mature whistle from a referee which, in a way would deflate the spirit of the Comets late in the first period.

The second period would prove to be the exact opposite.

Hudson and Solon would score two goals each to tie the game at two a piece by the second intermission with goals coming from Chandler Kotesos and Joe Collins for the Explorers for the first two goals of the game, and goals for the Comets coming from Zach Mandry and Ricky Formani in consecutive fashion as well.

Man dry would also record an assist on the Formani goal.

As for the third frame, the back and forth battle would continue with Hudson scoring fisrt on a short handed, unassisted, breakaway goal by Zach Meyers for Hudson off a Wu turnover which would put the Explorers up 3-2.

Then Solon would answer back with a goal from Mike Rapposelli with 11:30 left in the third frame to tie the game once again.

But Hudson’s Chandler Kotesos would score his second goal of the game with 6 minutes left to put the Explorers up 4-3.

In last minute effort to get extra skaters, Solon would pull their goal Mark Shannon only to have a goal scored on the empty net for the Comets to end the game a 5-3 victory for the #3 ranked Hudson Explorers over the #6 Solon Comets. Austin Ganely would record the win for Hudson.

Hudson will now face Rocky River Saturday, February 13, at 7:30 PM at the John M. Coyne Recreation Center in Brooklyn for the last semi-final game of the Baron Cup brackets.