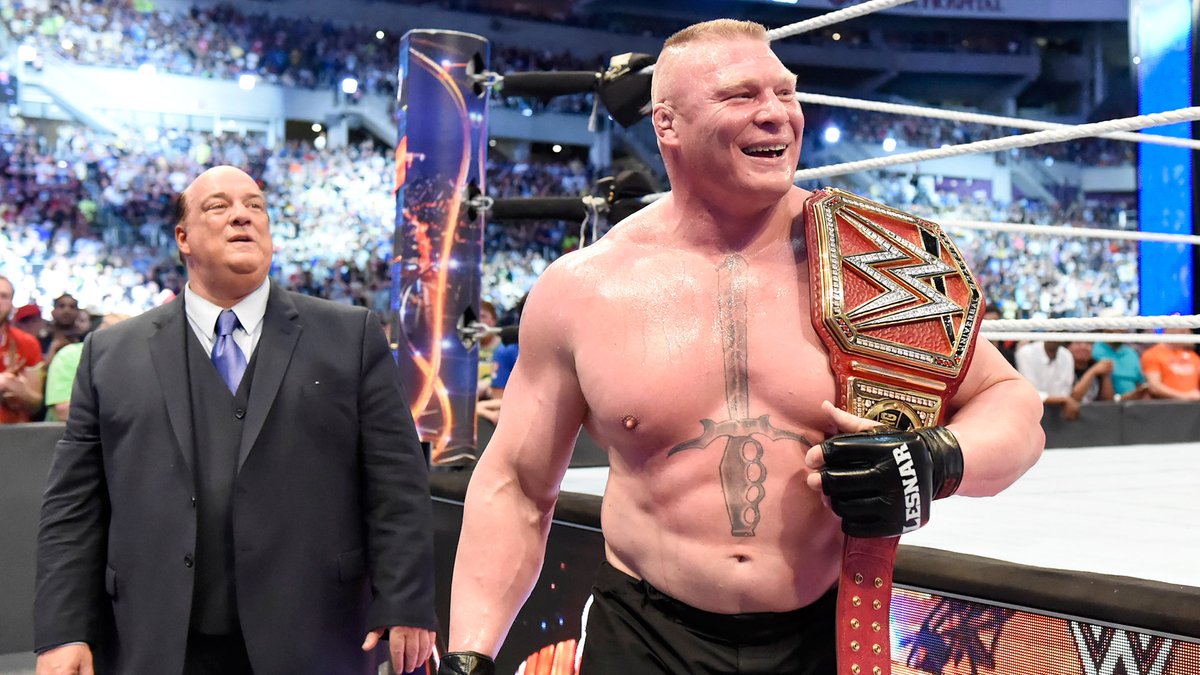 The WWE only get’s a certain amount of Brock Lesnar appearances per year, per his contract.  They sure wasted one tonight.  Paul Heyman started off the show with a rather good promo, several times eluding to Lesnar leaving WWE soon for UFC.  He gave more then one innuendo about it.

While it was a great promo as Heyman pretty much foreshadowed Angle and the WWE pulling a “Montreal Screwjob” type of finish to keep the belt in WWE just in case Lesnar leaves for UFC (Kayfabe), it was a completely wasted appearance by Lesnar.  He did nothing in the entire segment except stand next to Heyman and grin.

Why would the WWE waste money on that little of a showing?  Not only that, ,but there was a good chance that Lesnar was already on a plane back home by the time the main event started.

To compound the puzzling question of it all, is not too much later in the evening it was a thrilling 3 Way Dance between Samoa Joe, Braun Strowman and Roman Reigns that tore down the house!

After the Reigns victory over Joe, it would only make sense that Lesnar would run out and lay out all 3 of his future opponents.  Sadly, Lesnar was nowhere to be found at that point, and as I referenced before, was more than likely already long gone from the building.

Granite, Jon Jones calling out Brock Lesnar after a victory over Daniel Cormier Saturday Night at UFC 214, had everyone talking, and the WWE more then likely wanted to take advantage of the buzz currently surrounding Lesnar right now.

However, it still seemed like a total waste.  Even more so of a waste then the pointless house shows he has done as of late as well.

As for his reply to the challenge, he decided to answer Jones through the Associated Press, simply stating “Be careful what you wish for young man”.

Lesnar retired from MMA earlier this year due to his suspension following UFC 200, and he will not be able to actually compete in the octagon for at least six months as he needs to re-enter USADA’s testing pool once he is no longer suspended.

However, some believe that the UFC Higher Ups may be able to make that suspension go away in time for UFC 217 in November at MSG.

Other news and notes that stand out from RAW