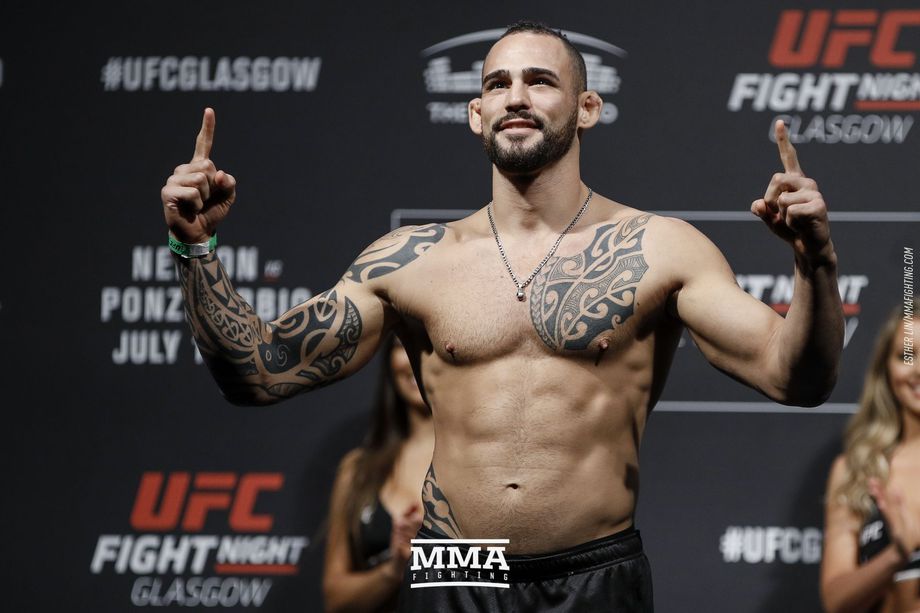 Ruthless Robbie Lawler and Rafeal dos Anjos collide in a matchup of two former UFC world champions.  Rumors are heavy that the winner will be next in line for a shot at Tyron Woodley’s Welterweight title.

Just 18 months ago, the two opponents were simultaneously champions in different divisions, Lawler at welterweight and dos Anjos at lightweight.  Both southpaws hope to knock their way out back to championship gold.  Ironically, both were knocked out cold by their opponents to lose their respective straps.  Lawler to the for mentioned Woodley and Rafeal dos Anjos by Eddie Alvarez.

Both men are deadly with their fists and masters of taking their opponents into deep water before sinking them.  They can beat you a number of different ways and both also experienced late career surges to come into UFC prominence.

A crazy stat for Robbie Lawler that simply cannot be ignored is this, Lawler has fought 30 times for major organizations (including the UFC, PRIDE, EliteXC and Strikeforce). That action spans 5 hours, 26 minutes and 36 seconds. In all that time, Lawler has never attempted a single submission.  His game plan is simple, beat you up and put you out!

Rafeal dos Anjos was once 0-2 in the UFC, and on the wrong end of a highlight reel knockout by Jeremy Stephens where he was hit so hard at UFC 91, that his eyes literally rolled back in his head as he left his feet and crumpled to the mat motionless.  It remains one of the most memorable knockouts in UFC history.  He then lost his next time out after that, it would have been easy to quit.  He didn’t!

From there he went on a crazy 12-3 stretch in the UFC before landing a well-earned, and very well-deserved title shot against Anthony Pettis, the then UFC Lightweight Champion at UFC in March of 2015.  Since then he has gone 3-2 and made the jump to Welterweight for a shot at another championship in a different weight class.

Both of these men are warriors, both of these men could have quit several times when things weren’t going well and never did.  Lawler himself has one of the most well-known rags to riches stories in UFC lore and has taken part of some wars in that cage.  Most notable against the likes of Jake Shields, Josh Koshcheck, Rory McDonald, Matt Brown and several others.

With that being said, the main event is sure to deliver.  Let’s take one last look at the entire main card before tonight, complete with predictions.  My predictions for the last 10 events have been better than 80%, so you can bet on these if you choose, but remember to always gamble responsibly.

Prediction – Both men have shown iron in their fists, but also glass in their jaws as of late.  This one could go either way, but I think Teixeira is just a little more well-rounded and that will be the difference.

Prediction – A lot of hype behind Mike Perry these days, most of which coming from my fellow MMA analyst Eli Mooneyham, but much of it well deserved.  Platinum Mike Perry may very well be the best kept secret in MMA, but not for much longer.  He knows how to swat, and knock people out quickly. 12 fights, 11 knockouts, believe the hype because it is well founded.  Look for Perry to win tonight and call out Lawler right after, just as he did in Pittsburgh back in September.

Prediction – Emmett missed weight, and clearly struggled with the cut.  Lamas is one win away from a possible featherweight championship match with Max Holloway.  This should be an easy win for Lamas but stranger things have happened in the past.  I’ll stick with my guy here and take Lamas.  Holloway and Lamas have fought before and fans have been clamoring for a rematch.  However, Brian Ortega may have something to say about that as well.  Time will tell!

Prediction – I don’t know what it is, I cannot put my finger on one set thing, but just as I did with Thug Rose and Joanna, I smell upset.  I’m taking Anjos in this one as he finds a way to stay on his feet and then take Lawler off his for the submission victory.

Agree or disagree, let me hear about it on twitter at VinceTheAuthor, or in the comment section below.