UFC 199 A Night For The Champions! – Live Blog and Recap 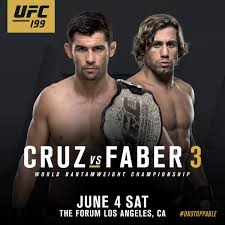 Brian Ortega looked amazing in a third round knockout of Clay Guida. Ortega is now 13-0 and should be fighting on the main card soon!

Lightweight – Bobby Green vs Dustin Poirier
Dustin Poirier is a former main eventer and for good reason, he used his quick hands and relentless attack to finish Bobby Green with a thunderous first round knockout.

Dan Henderson chased glory one more time, and caught it! With a incredible elbow knockout of Hector Lombard in the second round. Henderson had been caught several times in the first round and almost put out. He rebounded with a strong strong attack and stunned Lombard with a vicious elbow to the back of the ear that set up the ground and pound knockout. Henderson, looked emotional in the post fight interview as Lombard laid on the ground out cold.

Up next Lamas vs Holloway

Max Holloway looks like the number one contender for the featherweight title with a big win tonight over Lamas.
He won 30-27 and stands to get a title shot soon.
EARLY LEADER FOR FIGHT OF THE NIGHT!

49-46 across the board for Cruz in a fight that was never close.
Faber is done as far as title fights go.
Cruz, battling a sore foot, never let it stop him from dominating the action!
Faber showed a tough chin, hung in there and it made for a good fight.

UFC Middleweight championship fight
Michael Bisping knockouts out Luke Rockhold in the first round to win the title in shocking fashion!