Tribe take 2 of 3 from Angels 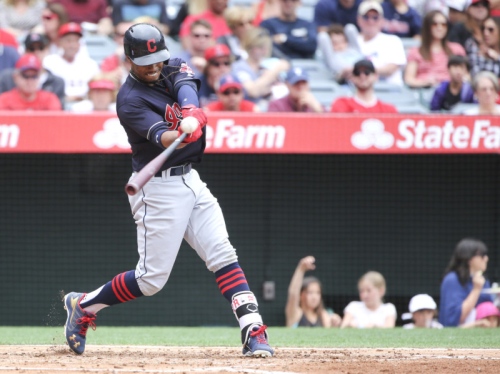 After splitting a four-game series with the Seattle Mariners, the Cleveland Indians rolled into Anaheim for a three-game matchup with the Angels.
The tribe were able to take two of three with a good combination of solid hitting and great starting pitching, outscoring the Halos 17-9.

Friday: Indians offense struck early on in the game and never looked back from there. Put a four run spot in the first inning. Two more runs came in to score during the second, running starting pitcher Hector Santiago out of the game and causing Manager Mike Scioscia to go to the bullpen early. The bats went quiet after the second inning as they were unable to produce anymore runs. Corey Kluber went out and pitched a complete game giving up three hits, two runs and striking out eight. Taking care of game one 6-2.

Saturday: Game two the Tribe fell to the Angels thanks to Yunel Escobar. Trevor Bauer took the mound for Cleveland and pitched eight innings while allowing three runs with two earned runs. Matt Shoemaker opposed Bauer and pitched eight scoreless innings and striking out eleven. The Tribe’s bats came alive in the top of the ninth inning as they were able to get to Angels closer Houston Street tying the game 3-3. Shaw came into the bottom of the ninth then with runners on first and second Yunel Escobar singles a line drive to center field giving the Angles a 4-3 win.

Sunday: In the rubber match of this three game series, the Indians jumped out first as Francisco Lindor belts a solo shot in the first inning. Followed by a four run second inning. Danny Salazar had a good outing going five and two thirds, only giving up a solo home run to Jefry Marte and punching out eight. Tribe scored another run in the seventh and a two run home run in the ninth by Santana capping off the 8-3 victory for the tribe,

Going 4-3 against Seattle and Los Angeles the Indians still sit atop the Central Division as they are three games ahead of the Kansas City Royals.

The Indians will try to further the distance as they travel to Kaufmann Stadium to finish off this road trip with a three game series against the Royals.

Amazing Tickets NEO Sports Report Weekend Recap!
Tribe continues to be patient with Brantley, but not without concern rising