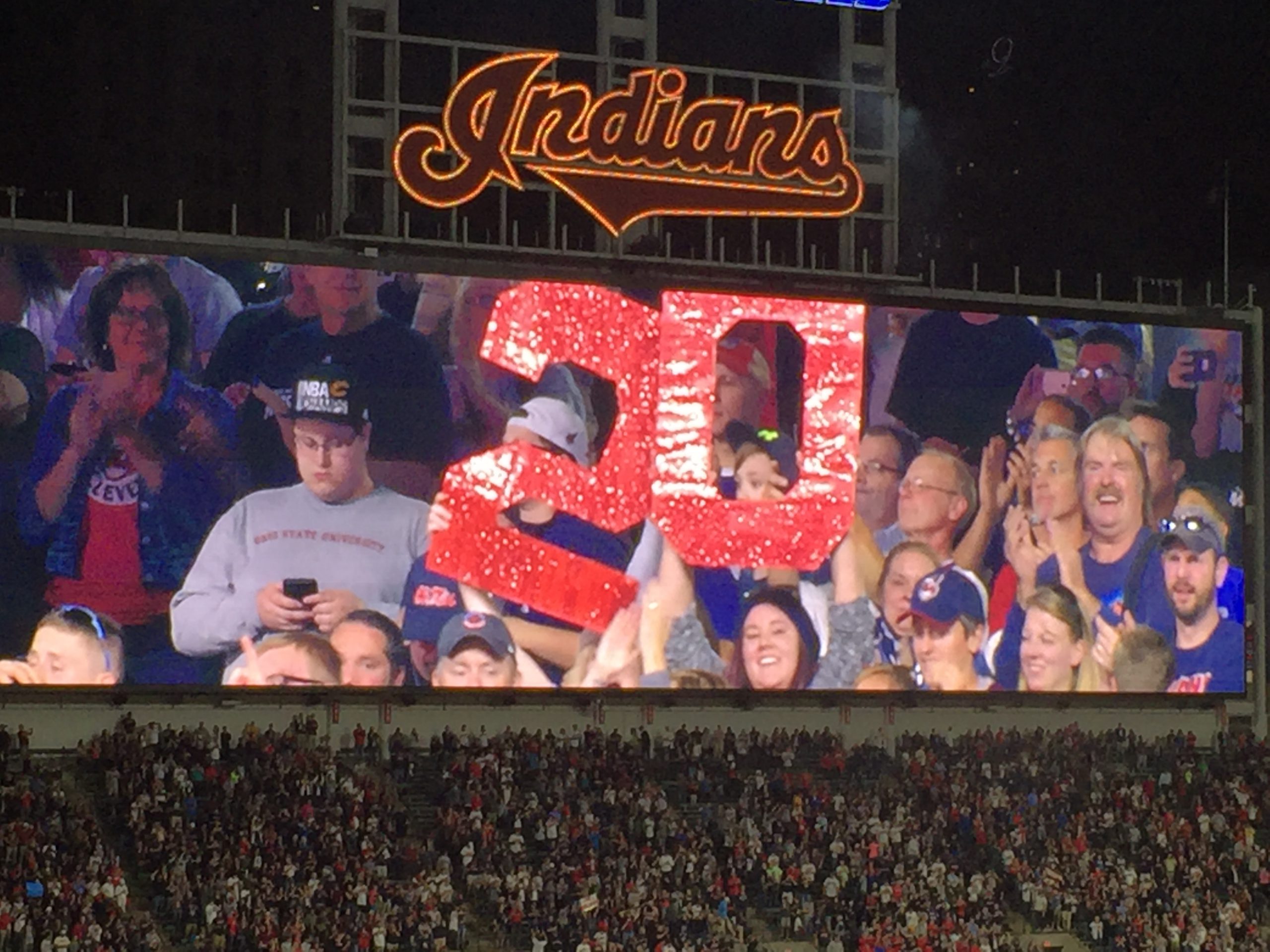 As the long-awaited regular season is set to begin let’s take a look back at some of the most memorable Tribe games over the years.

10. When Indians fans hear the word “drone” it often is a reminder of the 2016 ALCS. Starting pitcher, Trevor Bauer, was infamously injured while working on his drone during the series against the Blue Jays.

Bauer took the mound for Game 3 and fans cringed as blood dripped down his hand with each throw. After just 21 pitches he exited the game and left skipper Terry Francona with the task of piecing together a puzzle of relief pitchers.

Francona used six pitchers after Bauer departed and with some offense from Mike Napoli, Jason Kipnis and Jose Ramirez the Tribe squeaked out a 4-2 victory. The blood-stained mound from Bauer’s finger was no match for the ingenuity of Francona and the bullpen.

9. The Indians team of 1995 was arguably one of the best in the organization’s history. They are often referred to as “the best team in MLB to never win a World Series”. Though they could not produce the coveted trophy this magical team gave fans many memories.

It was do or die for the Tribe in Game 5 of the series. The Indians had their “bulldog” starting pitcher Orel Hershisher facing Atlanta Braves “mad dog” Greg Maddux. With their backs against the wall, the Indians came out swinging. Albert Belle gave the Tribe the early lead with a two-run blast in the first inning. The Braves never recovered as the Tribe went on to win 5-4.

8. The end of the 41-year post season drought was a night of electricity for the city of Cleveland. September 8, 1995 the Indians beat Baltimore 3-2 to become the American League Central Division champions. Sandy Alomar got the Tribe’s offense started and Kenny Lofton, Omar Vizquel, Carlos Baerga and Eddie Murray all followed suite.

Jose Mesa closed out the game to record his 40th save which was the best in the league. This was a franchise that just four years earlier had lost 105 games and now the sellout crowd of over 41,000 cheered with joy when Jim Thome caught a pop-up to end the game. Tom Hamilton, radio announcer, said “I can’t get over the emotion in this ballpark and this city based on that clinching. I guess it’s the realization that the impossible dream has come true and they are going to be in the postseason.”

7. Game 7 of the 2016 World Series. The pain, the rain, the stinging defeat yet one of the greatest games in the history of baseball. The Indians were at home looking to bring a World Series championship to the city after blowing a three-game lead. It was an epic battle between two underdogs. Both the Indians and Cubs were franchises who had two of the longest World Series droughts in MLB. Chicago hadn’t won in 108 seasons and the Indians’ drought stood at 68 seasons. It was a magical summer for the Tribe as they showed amazing grit battling through a string of injuries. It all came down to a thrilling Game 7.

Despite the loss fans will never forget Rajai Davis’ game-tying two run homer off of closer Aroldis Chapman. That moment the ball left the park the entire city shook from the fans rocking the ballpark. A seventeen-minute rain delay followed, and the Indians lost momentum. The tribe attempted to come back in the bottom of the 10th inning but failed. There were dozens of moments in that game, but Davis’ homerun is the most goose bump inducing of them all.

6. Game 5 of the 2016 AL Championship Series had the Indians in line to have their first World Series appearance since 1997. Due to Trevor Bauer’s finger injury the Tribe put their hopes in the hand of Ryan Merritt who had just four Major League appearances including only one start. The Indians’ opponent Toronto Blue Jays infamously taunted the young pitcher by saying he would be “shaking in his boots”.

Merritt quieted the Jays’ jabs by allowing just two hits in 4 2/3 innings. He showed poise of that of a veteran. Indians’ Coco Crisp homered in the fourth inning to give the Tribe a 3-0 lead which is all that was needed to send the team to the World Series. Relief pitcher Andrew Miller was dominant keeping the Jays’ bats quiet and closer Cody Allen came in to finish them off.

5. 1995, 1995, 1995 – such an extraordinary team as they make the list of top ten games a few times. October 17, 1995 the Indians claimed their first American League pennant in 41 years. The Indians were up against it facing Seattle’s dominating starter Randy Johnson.

They were also on the road in the Kingdome and the Mariners had just clawed back at the end of the regular season from a thirteen game deficit to win the AL West. The Tribe seemed unphased with veteran Dennis Martinez on the mound. Martinez kept the stellar Mariners’ offense quiet through seven innings. An error by Seattle’s second baseman Joey Cora gave the Indians an unearned run against Johnson.

However, the real nail in the coffin was a three-run dinger by Carlos Baerga to give the Indians a 4-0 lead. The Tribe bullpen held onto that lead and sent the beloved team to their first World Series in decades.

4. A seemingly average Sunday night in Cleveland on August 5th, 2011 quickly turned into one of the greatest comebacks in Indians’ history. The Tribe was hosting the Mariners, who had not only the best record in baseball but was leading 14-2. The seventh inning began the comeback as the Tribe scored three runs. The eight inning they scored four more runs but they were still down 14-9 heading into the ninth. Fans at Jacob’s Field were about to have some fun.

There were already two outs in the 9th with just a lone runner on base. Then Marty Cordova stepped to the plate and doubled to keep the inning alive. Einar Diaz then drove in two runs narrowing Seattle’s lead to three. A walk loaded up the bases and superstar shortstop Omar Vizquel cleared the bases with a triple and sent the game into extra innings.

Three consecutive singles in the bottom of the eleventh would end the game with a single off the broken bat of Jolbert Cabrera to score Kenny Lofton. It was only the third time in MLB history that any team had come back from a dozen run deficit to be victorious.

3. Tyler Naquin’s inside-the-park home run August 19, 2016 is on almost every Indians highlight reel and rightfully so. Naquin joined an elite group of players who have combined for just over 700 inside-the-park home runs in the past 50 years. In the bottom of the ninth Jose Ramirez hit a solo show to tie up the game and Naquin was on deck. The rookie hit a high fly ball and it bounced off the right field fence.

The ball rolled into the field when Blue Jay’s right fielder Michael Saunders failed to leap and make the catch. This gave Naquin the chance he needed to fly around the bases and dive headfirst into home plate. He made it just in time to give the Indians the walk off win and a photo at the plate that Tribe fans still celebrate to this day

2. 2017 ALDS Game 2 against the Yankees the Tribe found themselves down 8-3 in the sixth inning. The bases were loaded for Francisco Lindor and he led  the rally with a grand slam. The crowd went wild but there was plenty of more excitement in store. Jay Bruce went on to homer in the eighth to tie the game. This had been a season of comebacks and setbacks and ironically this game had some of both.

Corey Kluber, the Tribe’s ace, seemingly fell apart on  the mound. It was one of the worst performances of his career as he only pitched 2.2 innings giving up seven hits and six runs. Despite that disappointing  effort by Kluber, the bullpen rallied along with the offense couple that with several questionable calls/reviews and it was a wild game. In the bottom of the 13th, Indians’ catcher Yan Gomes ended the game with a single allowing Austin Jackson to score from second.

1. The Streak. Those two words take Indians’ fans back to late summer of 2017. September 14, 2017 the Tribe was hosting the Royals. The Indians had already set the AL record for the longest win streak at 21 games and were searching to break the record.

The crowd was on pins and needles as the team trailed by one in the bottom of the 9th. Enter clutch hitter, Francisco Lindor, who hit a two-out double to tie the game 2-2. The streak had been full of great moments but what happened next was nothing short of poetic. Jay Bruce hit an RBI double in the 10th to give the team the honor of the second longest win streak in MLB history. The streak had a little bit of everything along the way and it ended with a walk-off win. No, the Tribe hasn’t won a World Series but they have accomplished the 22 win streak, which some critics argue is actually more difficult.

With this baseball season beginning in late July, fans are ready to get back to watching their team play. It may not be in a conventional sense, but will it bring Tribe fans great memories or iconic games? Anything is possible in Cleveland.

Indians Bench Coach Brad Mills Opts Out of Coaching for the 2020 Season
Indians Start Slow, Get Much Needed Offensive Explosion in 13-0 Win Over Reds