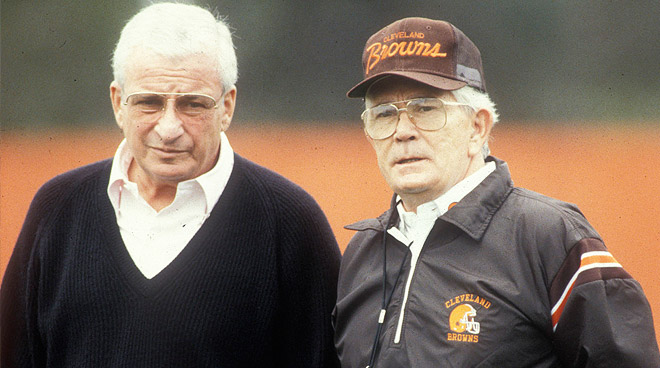 Welcome to a new series here on NEO Sports Insiders – a topic that I think any Browns fans can chat about for hours on end, that being why this organization has been a failure for the last 17 seasons.

Sure there’s been a few shining moments, but by in large this organization has been a complete and utter disaster. The Browns, a team with such a strong tradition with a loyal fan base, has done little to give back to the fans.

We take you through what we think are the top 10 reasons as to why it’s been as bad as it has, and today we start with the number 10 reason – the dreaded ‘Curse of Art Modell.’

He stood on a stage in Baltimore in November of 1995 proclaiming his excitement taking the heart and soul of Cleveland and moving them to a city that had lost it’s own team the decade before.

Art Modell told anyone that would listen that he simply ‘had no choice’ and the reasons for that are simple. Modell was an awful businessman.

He begged and borrowed to try to make ends meet, and that summer needed a boatload of money to try and pay a bonus to his new prize, that being wide out Andre Rison.

Since Modell’s move, the Browns have never been the same, not playing in the league for three seasons, and since their return in 1999 they have had 10 seasons of double digit losses.

The Ravens, Modell’s new team in Baltimore, is 25-9 against the Browns since 1999, and has won a bunch of playoff games, not to mention a pair of Super Bowls, the biggest kick in the gut.

When the Browns returned in 1999, the role of owner was handled by Al Lerner, one of the key players in the Browns move to Baltimore in the first place, leading to more conspiracy theories that the Modell curse was a real thing.

Seeing Modell tear up holding the Super Bowl trophy after the 2000 season was a sight that enraged Browns fans to no end.

In the end, the city of Cleveland got what they wanted – their team back, the colors and history, along with a new stadium. The problem is Modell, even in death, seems to have gotten the last laugh.

He watched while the Browns languished while his Ravens played in a number of huge playoff games and a dominating win in the Super Bowl.

Modell’s name still draws fire from Browns fans who would rather forget 1995, and the three seasons they were without NFL football in the city of Cleveland.

Can the Browns overcome the curse of Modell? Having already lost 11 games and more than likely it looks like a 3-13 season, the curse to this day still appears very real.