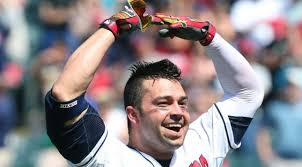 Three very familiar former members of the Cleveland Indians have agreed to deals to resume their Major League Baseball careers on Thursday. All three veterans are hoping this won’t be their final opportunity to keep their careers alive.

Nick Swisher spent the previous three season with the Indians after leaving the New York Yankees and signing a four year contract in 2013 here in Cleveland. After helping lead the Indains to the 2013 American League wild card game, injuries put an end to his days with the tribe earlier than he had hoped.

Swisher was traded to the Atlanta Braves last August. The Braves released Swisher during Spring Training. Since his release, Swisher has been keeping in shape at the New York Yankees training complex in Tampa, Florida.

Reports surfaced recently that Swisher and the Yankees would agree to a deal. Thursday that officially happened. Swisher agreed to a minor league deal with the Yankees and is in the starting lineup at first base for their Triple-A affiliate in Scranton, Pennsylvania.

David Murphy spent the last two years in an Indians uniform, after spending the majority of his Major League career with the Texas Rangers. Murphy was traded to the Los Angeles Angels right before last years non-waiver trade deadline. Murphy was hoping to make the Boston Red Sox opening day roster, but once Murphy found out he would not make Boston’s opening day roster, he asked for hism release instead of a minor league assignment.

Well after being a free agent for a few weeks, Murphy has acdepted a minor league assignment. Muyrphy will be back in the American League Central Division as he has agreed to a minor league deal with the Minnesota Twins. Murphy will be assigned to the Twins Triple-A affiliate in Rochester, New York, but could be called up very soon if the Twins continue to struggle. Minnesota is still winless on the season.

Justin Masterson used to be the ace of the Cleveland Indians pitching staff. Masterson represented the Indians atthe 2013 Major League Baseball All-Star game and won 14 games that year. Masterson also made back to back opening day starts in 2013 and 2014.

After a disappointing 2015 season with the Boston Red Sox where he split time as a starter and a reliever and ended with arthroscopic surgery on his right shoulder, Masterson found himself out of a job until Thursday. Masterson agreed to a minor league deal with the Pittsburgh Pirates.

The Pirates have a solid rotation but could be an insurance policy if one of the starters gets injured. Masterson could also be considered as a long relief guy for manager Clint Hurdle down the line. The Pirates have shown interest in Masterson before.