The Indians Need to Stay Cautious with Mike Clevinger 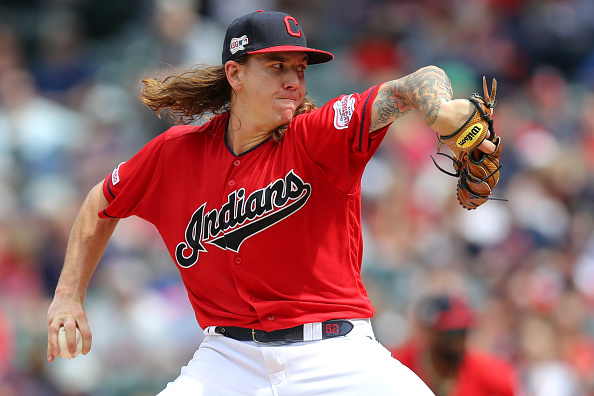 A few weeks ago, an update regarding starting pitcher Mike Clevinger cast some serious concerns over the Cleveland Indians‘ chances in 2019. Another one was provided yesterday, which essentially had the exact opposite effect.

Despite a back injury initially sidelining Clevinger until the midway point of the season, we found out yesterday he appears to be ahead of schedule. When the injury announcement first came down, we heard it would be two months before he could even pick up a baseball. However, manager Terry Francona said Clevinger played catch at 60 feet yesterday, even throwing out of his normal delivery.

It goes without saying, this is good news for Cleveland.

Sorry, I should clarify – this is good news, to a point.

Yes, it’s great to hear Clevinger is ahead of schedule. With that said, it’s important for the Indians to still express caution when it comes to getting their starter fully recovered. The last thing they can afford to do is rush Clevinger back.

This isn’t my attempt to rain on a parade. It was genuinely upsetting to hear Clevinger’s initial diagnosis, if only because he seemed poised for a breakout season. Knowing how crucial the Indians’ rotation is when it comes to their success this season, losing such a key member so early was a big blow.

Despite that, the last thing the Indians need is for Clevinger to aggravate or re-injure his back because he pushed too hard to speed up his recovery.

Obviously, with his being on the 60-day IL, Clevinger is unable to be activated until June. In that regard, Cleveland clearly isn’t in danger of putting him back on the mound too early.

What this also hammers home, though, is the need to ensure he doesn’t go crazy trying to get back to full strength earlier than planned.

Simply put, there’s no rush. Speeding through rehab won’t put Clevinger back on the field any sooner. If he’s feeling better, great, glad to hear the injury isn’t lingering worse than anticipated. However, there’s still no need for him to push himself if it means risking further damage.

I’m sure Clevinger is thrilled about the fact he’s able to throw far earlier than what was initially stated. At the same time, it’s difficult not to get a little apprehensive when hearing him say he’s attempting to get his velocity up even higher.

Mike Clevinger doesn't like being sidelined, and he's ahead of schedule on his recovery.

"If anything, I’m coming back as a bigger and better horse."

I’m all for Clevinger working hard to come back even better than he was looking before being shelved with an injury. Still, it’s important for Cleveland’s trainers to prevent him from overdoing it.

Maybe I’m being a little over-anxious, reading too much into Clevinger’s progress update. However, this is due in part to how important the rotation is for the Indians this year.

The front office hasn’t been subtle when pinning its hopes for success solely on starting pitching. The team has been designed to rely on the rotation to overcome a weakened offense and questionable bullpen. The message was clear – provided the starting pitching is at 100%, Cleveland can hang with anyone.

Knowing this, every update with the rotation will be placed further under the microscope. In this case, while Clevinger being ahead of schedule is a positive, the hope remains that both he and the Indians remain cautious with his rehab, if only to ensure 60 days is all he misses.

To their credit, the Indians have stayed afloat despite missing one of their best pitchers, which is certainly commendable. Still, this isn’t an invitation to push their luck.

Clevinger’s progress update indicates he should be ready to go by the time his IL stint ends. Cleveland just needs to be sure he doesn’t do anything to hinder that.