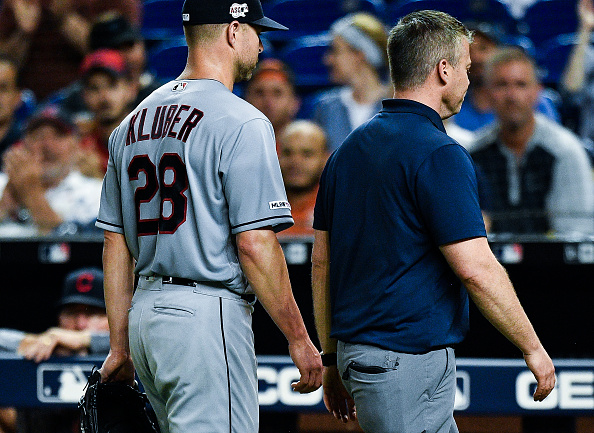 The Cleveland Indians laid out very clear expectations for the 2019 season. The starting rotation, seen by many as the best in the league, could carry the entire team to the promised land.

It didn’t matter that the offense was weakened over the winter, or that the bullpen was composed of a collection of soft-tossers. Thanks to elite starting pitching, the expectation was for Cleveland to contend. Period.

We’re not even two months into the season, and said strategy has already been exposed.

Just a couple weeks after Mike Clevinger was placed on the 60-day IL with a back injury, fellow starter Corey Kluber took a line drive to his right arm. He suffered a non-displaced fracture, and won’t be back anytime soon.

The rotation Cleveland counted on as its ticket to the postseason, the main reason why ownership didn’t feel compelled to make roster additions in a contending year, is down two starters for the foreseeable future. One would think a setback like this would alter the Indians’ plans for the rest of the year.

The Indians have no choice but to keep their sights on the postseason. Fans were told all winter long to expect another playoff berth. As a result, the front office can’t just waive the white flag because of injuries to the rotation.

It may sound harsh on the surface. Obviously, the losses of pitchers like Kluber and Clevinger would hinder even the most elite teams. These are two massive blows, there’s no getting around it.

Despite that, ownership hasn’t earned any sympathy here. Saying “oh well, we’ll try again next year” isn’t an option. This team was designed to lean almost entirely on its rotation. Making the postseason wasn’t the goal, it was the expectation. Those plans can’t alter just because of starters getting shelved.

Injuries were always a possibility, as is the case for any team. However, thanks to the way Cleveland was set up this season, injuries to the rotation were always going to carry extra weight.

Ownership spent the winter shedding offensive production. Talent was either traded or left in free agency, with nothing done to replace it. The goal wasn’t to strike while the iron was hot, but instead to save money.

Despite this, all we heard was this wasn’t a rebuild, that the team still had its eyes set on a World Series. The reasoning was clear — with a rotation like this, there was no need to spend a ton on roster upgrades.

Frustrated fans were greeted with the same response all winter long. Yes, we’ve lost some talent. Yes, we still plan to make the playoffs.

The flaws in this approach were clear as day. By shedding offense for the sake of cost-cutting, the team put more on the shoulders of its starting pitching. Cleveland built a team focused on its rotation, but also one which may not survive if this unit dealt with adversity.

Yet, there was no caveat to this, no mention of the word “unless.” Nobody said, “Of course, if our starters get hurt, we’ll have to adjust accordingly.”

As a result, Cleveland can’t just roll over. Kluber’s injury can’t turn this team into an asset collector. The Indians still have to be buyers on the trade market, not sellers.

This is the bed the Indians have made. The rotation is the heartbeat of the team, but only because ownership didn’t invest in any other area of the roster. The offense is anemic, mainly because it’s designed to be. Fans were told to expect October baseball despite this, and that narrative can’t change after a month.

This may be a big pill for ownership to swallow. It’ll likely cost money, more than the team would like to spend.

This is a contending year. The Indians said as much. That can’t change just because your strategy was exposed in May.