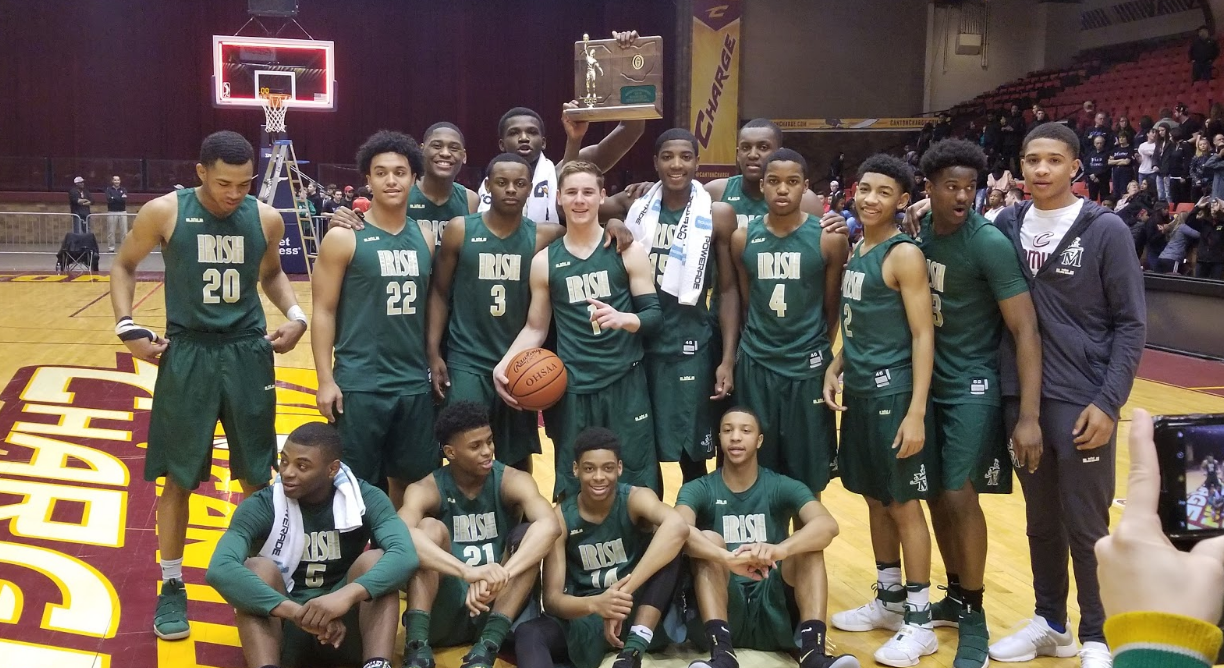 CANTON, OHIO– The Fighting Irish of St. Vincent-St. Mary are making a familiar trip down to Columbus for the state tournament after topping the VASJ Vikings, 84-69. Here are some takeaways from the win.

Saturday afternoon’s victory means St. Vincent-St. Mary will make their 17th trip down to Columbus. The Irish have been in the OHSAA Final Four three straight seasons.  The program’s success isn’t lost on long-time head coach Dru Joyce, as he was visibly overwhelmed with joy following the Irish victory.

Having seen St. V play in every tournament game except for their opening round matchup, this was the most complete effort the Irish put together all tournament. VASJ was trying to cut into the lead desperately in the fourth quarter. The Irish were able to hold strong despite senior point guard Scott Walter being in foul trouble.

This game was much closer than the final score indicates as the Vikings constantly made the Irish feel the pressure and play their A-game. Leading by only two following the opening quarter, this one seemed like it was going to be a nail-biter. The Irish had different plans as they got hot from deep, hitting five of their six 3-pointers in the second quarter. This run of 3s would prove to be the difference, as the Vikings were never able to recover.

VASJ senior point guard Jerry Higgins did all he could to will the Vikings to Columbus. The senior poured in 35 points, including 23 in the third quarter. Higgins has been the leader for the Viking program since he began high school, and it was truly inspiring to see him put forth such an effort in a loss. Viking fans got their moment to thank Higgins when he checked out for the final time, as both Viking and Irish fans gave Higgins a standing ovation. One of the best things about high school sports is seeing teenagers play with such heart and determination. One of the worst? Watching players such as Higgins play their final game.

St. Vincent-St. Mary travels down to Columbus to take on the winner of the Bowling Green Regional, the Lexington Minutemen. The Minutemen defeated the Bay Rockets, 65-64. The Irish and the Minutemen play Friday at 2 p.m. in Columbus.

Soccer: SC Cleveland To Hold Open Tryouts For Spots On Roster
Solon earns trip to Columbus with 81-60 win over Copley