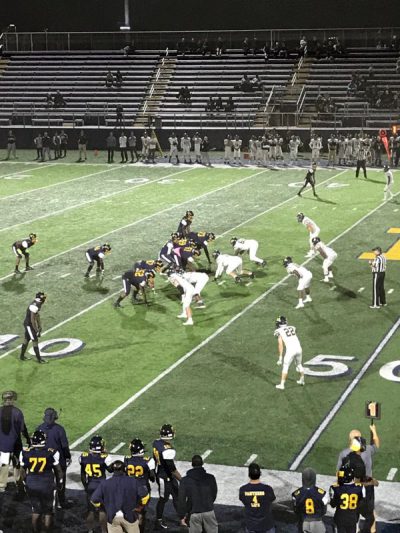 Euclid (6-1) clicked for a field goal and a touchdown in the first quarter and seemed to be wearing down the Comet defense. When the Panthers’ Jabiir Mujihad scored on a 13-yard run with 8:48 remaining in the second period, Euclid had the game well in hand, up 17-0.

But with time running out in the first half, Solon Coach Jim McQuaide reached into the bag of tricks and called for a fake punt on fourth down at the Euclid 47-yard line.

The Comets’ Grant McCurry took the direct snap and rambled 31 yards down the right sideline. The surprise call woke up Solon and McCurry who had both struggled to that point.

On first down at the 16, Euclid was called for an offside penalty. Solon (5-2) needed only one play to pick up the final 11 yards, and it was quarterback Pat McQuaide taking it to the end zone on a delay up the middle. With 1:41 to play in the first half the Comets suddenly found themselves in a ballgame!

The third quarter was an exercise in frustration for Euclid. Their first possession ended in a fumble after a long running play into Solon territory.

They got the ball back with 9:33 left in the quarter but, after going three-and-out, gave Solon excellent field position at the Panther 11 with a shanked punt that traveled only 9 yards from scrimmage. On second down, Pat McQuaide (son of the Solon coach) found Greg Parries with a 9-yard pass in the corner of the end zone. Despite a fumbled snap on the conversion attempt the Comets had cut the Euclid lead to 17-13.

After an exchange of punts, the Panthers finally put together an impressive drive—their first since early in the second quarter. After accumulating three first downs Euclid was in good position to fortify their lead entering the fourth quarter. But a fumble with 0:19 remaining in the third was recovered by Solon’s Jack Westrich. The Comets had dodged a bullet.

There was plenty of back-and-forth action in the final period, but no scoring until Solon took their first lead of the game with 3:23 to play. QB McQuaide managed to elude the grasp of a Euclid defender and hit McCurry in stride for a 13-yard touchdown. After the conversion kick it was Solon 20, Euclid 17.

It only took Euclid 56 seconds to reclaim the lead. The key play of the drive was a pass from QB Andre Rallings to receiver Jaylen Morris that gained 50 yards. On the following play Mujihad ran it in from 5 yards out and the Panthers were back on top 24-20.

Solon took possession for the final time with 2:27 on the clock and a light rain blanketing the stadium. The McQuaide to McCurry connection came up big again, hitting on a 69-yard pass play that gave the Comets a first down at the Euclid 16. Solon completed the drive on a 5-yard touchdown run by McQuaide with only 1:04 remaining in the game. Solon 27, Euclid 24.

The Panthers weren’t done yet, and appeared to regain the lead with a completed pass in the end zone. However, the Euclid receiver was called for pushing off and the Panthers had to settle for possession at the 20-yard line. Two incomplete passes and a 4-yard loss on a sack resulted in 4th down at the Solon 24 with 0:13 on the clock.

Euclid Coach Jeff Rotsky sent out the field goal unit hoping to send the game to overtime. The 41-yard attempt had plenty of distance, but sailed wide left and Solon had saddled the Panthers with their first loss of the season.