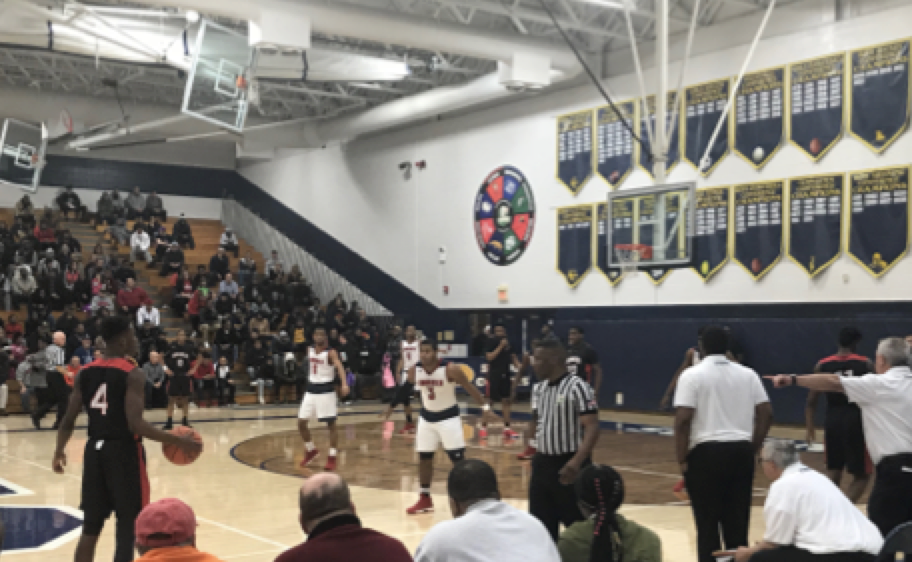 SOLON, OHIO– In a Dec. 20 matchup against Garfield Heights, the Shaker Heights Raiders fell three points short of pulling off the upset. With a convincing 76-56 win Thursday night over the Ironmen, Shaker will get the rematch they’ve been waiting for, this time the district championship is on the line.

“I’ve been waiting on this game since Dec. 20 when that clock hit zero,” senior standout Christian Guess said.

In a game where Guess got in some early foul trouble and was forced to watch from the bench, the Raiders had to rely on their backcourt to lead the team. The team did just that behind a sharp-shooting performances from senior Dale Bonner and junior Dakota Cochran, who each poured in 24 points.

Guess picked up his second foul of the game within the first three minutes of the game. Forced to sit the rest of the quarter, The Raiders and the Ironmen traded away baskets that resulted in a Cleveland Central Catholic one-point lead after the first eight minutes.

Cochran would find his stride in the second quarter, ending the first half with a corner 3-pointer to put his team up by seven points heading into halftime. This offensive rhythm propelled him to play an imperative part of the team’s success as the game went on.

The third quarter is when the Raiders pulled away from the Ironmen. The forced turnovers along with the patient Shaker offense helped bolster their lead. Cleveland Central Catholic failed to respond on the other end, failing to get the ball inside the paint. The Raiders went on to outscore the Ironmen 16-5 in the third quarter to take a comfortable 52-34 lead heading into the final quarter.

The Ironmen would not go down without a fight. They started the quarter on a 7-0 run to get within 11 points. From there, the lead wouldn’t get any closer as the turnovers enhanced due to the pressure defense from Shaker.

Bonner and Cochran would lead the Raider offense in the second half, just like they did in the first half. They both finished the second half by scoring 11 points apiece, ending the night with 24 points respectively.

“Dale and Dakota, they stepped up big time,” Guess said. “You know Dakota can shoot, that’s what he can do. Dale does everything. When Dale gets going, everybody gets going.

For the Ironmen, five players made up the 56 total points during the loss Thursday night. Senior Delshawn Jackson led the way with a team-high 21 points. Jerry Coleman contributed with 16 points followed up with Dyshawn Jackson’s nine points. The loss ends an impressive season for the Ironmen, finishing with a record of 18-6 while earning the second seed in the Solon district bracket.

As for the Raiders, the rematch against top-seeded Garfield Heights awaits them Saturday night at Solon. Cochran and his team have been waiting for this rematch since late December.

“We wanted the rematch bad,” Cochran said. “We practiced everyday hard just to get to this Saturday.”