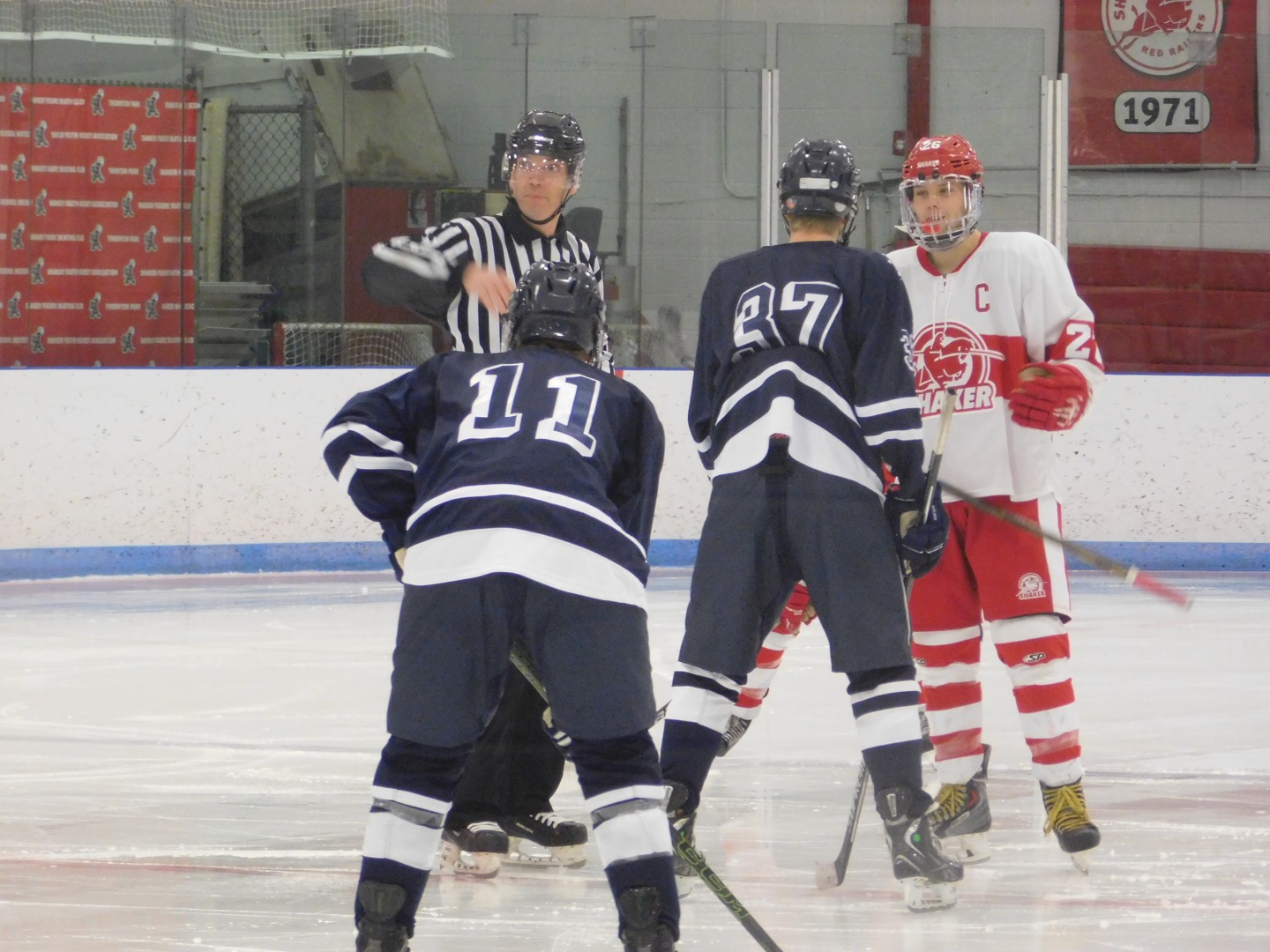 SHAKER HEIGHTS, OHIO – Back in February the Red Raiders of Shaker Heights did enough to overcome Hudson 3-2 in a memorable game for the championship of the Baron Cup I title in Brooklyn.

Friday night the two took the ice in front of a large and loud crowd at The J. Michael Bartley Ice Rink in Shaker Heights, and this time it was all Red Raiders, taking home a solid 7-1 win in their opener of play in the Greater Cleveland High School Hockey League.

It was an impressive win for Shaker, who won two three games last weekend in the Walsh Jesuit Thanksgiving Tournament.

Senior forward Ben Schneiberg led Shaker with a pair of goals, while sophomore forward Britt Anderson added a goal and a pair of assists in the win.

Goalie Liam Siwik allowed a goal to the Explorers of Hudson 65 seconds into the game, but stopped everything after that, leading the way for the Red Raiders to get the win.

Hudson was coming off a win over Mentor to claim the title in the Rocky River Tournament last weekend, but after starting quickly Friday night couldn’t get things going in the setback.

They got the first goal after Shaker was hit with a penalty 39 seconds into the game. Maxwell Cole made the most of it for Hudson, scoring a goal on a slap shot on the right wing to make it 1-0.

It didn’t take long through for the Red Raiders to get back into the game, as senior defensemen Adam Slovikovski found the back of the net to tie the game at one.

Geoff Grossman-McKee got the assist to get the game back to even with 8:48 left in the first period.

The Red Raiders took the game over :41 seconds later, as they got the lead for good on Schneiberg’s first goal with assists to Ryan Wheeler and Chris Strnisha to make it 2-1.

Later in the first Shaker struck again to make it a 3-1 game, with this time DC Benincasa finding the back of the net with Asher Pollack on the assist at 13:01.

Shaker ended the first with the two goal lead, having overcome Hudson’s early advantage to skate off the ice up 3-1.

The second period was a physical affair on both sides, as the two squads laid on some heavy hits while each net minder turned away shots with neither team able to mount pay dirt till the final seconds of the period.

On a scrum in front of the Explorers net in the final seconds, the puck eventually tricked into Hudson’s net to make it a 4-1 game.

Hudson goalie Stroud Carr disputed the goal, but the official who saw the puck go in said the goal stood, with Anderson getting credit for the goal to make it a three-goal game.

Already up three the Red Raiders turned it on in the third, scoring three goals to put the game away. The first goal came just :32 seconds into the period, as Wyatt Eisen got credit for the goal making it 5-1.

Grossman-McKee scored a power play goal for the Red Raiders 1:21 into the third period making it 6-1, with Anderson getting an assist.

Shaker ended the night with their seventh goal, a wrap around goal by Schneiberg at 5:09 of the third to round out the scoring at 7-1.

It was an impressive win for the Red Raiders who went 10-1-1 in league play last season, and are hoping for more of the same this season.

Hudson went 8-3-1 in conference play last year, and will look to rebound next Friday as they play in Kent against Kenston.

Shaker Heights will be back on the ice Sunday in a non-conference game against Padua at 4:30pm.

Click Page 2 to See More Pictures From the Matchup between Hudson and Shaker Heights!