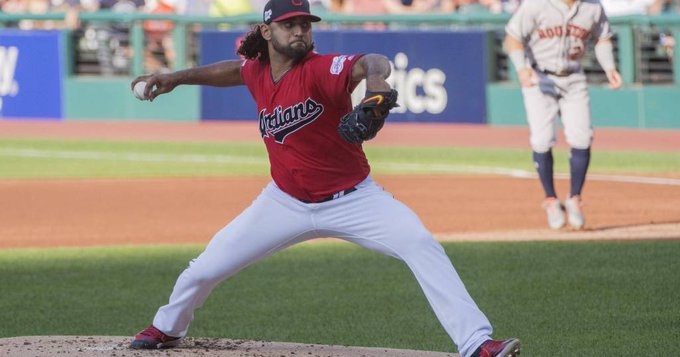 The Indians got to see Danny Salazar take the mound as a starter for the first time in two years on Thursday night at Progressive Field against the Astros.

The results were a mixed bag, but in the end the biggest question may be the following – when will Salazar be able to be back on the mound again?

The former All-Star was lifted in the fourth inning of the eventual Astros 7-1 win over the Tribe after he told the team’s coaching staff that he was having an issue with his groin.

It made sense as Salazar never turned up the speed on his pitches, with most being in the low to mid 80’s, clearly down from the low 90’s he was hitting on his fastball in his rehab starts.

Brad Mills, who was filling in for Terry Francona who missed the game after eye surgery on Thursday, said that the team was waiting to see Salazar start to get more on his fastball, but it just never happened as he topped out at about 88 MPH.

The loss puts the Indians at 63-45, and the team sits still at three games behind the Astros in the AL Central after Minnesota dropped an extra innings decision Thursday to the Miami Marlins.

Here’s a few takeaways from the six-run loss to the Astros.

1. A Tough Break for Salazar

For the first time since taking the mound against the Minnesota Twins back on September 27th of 2017, Danny Salazar was back starting for the Indians.

On a positive note he allowed just two runs on four hits in four innings against one of the very top offenses in all of baseball.

On the negative side, he never got over 88 miles per hour, and after the game Brad Mills said Salazar had told the Indians coaching staff of a groin injury that stopped him from being able to turn up the speed on his fastball.

It’s still a huge question mark as to what the future holds for Salazar and if he can do enough to stay in this rotation or even on this team.

For now, it was an outing that had its shares of ups and downs, and hopefully the injury to Salazar’s groin won’t be a long term issue.

2. Cole Gets a Lot of Help From the Astros D

Houston All-Star pitcher Gerrit Cole was not as dominating as usual when it came to striking out batters, just retiring four batters via the K in the six-run win.

The one thing that Cole had going for them was the fact he got a number of big plays behind him. Josh Reddick made an outstanding play in right field, George Springer stole extra bases on a play in center, and Carlos Correa made a great relay from Michael Brantley for another great defensive play.

Cole is 13-5 for a reason, and just like Tuesday night when Justin Verlander shut down the Indians, Cole did more than enough and then got some runs late to seal the victory.

Both Yasiel Puig and Franmil Reyes made their Indians debut on Thursday night, and oddly enough both players were thrown out at home.

Other than that, Puig made more of an impact for the Indians, going 1-for-3 with a double, walk and steal. He doubled in the fourth, his first hit with the Tribe.

Reyes singled in the second inning, his first hit in his first at-bat with the Indians.

The debut for the two new Indians power hitters came on a tough night against an excellent pitcher in Gerrit Cole,

Trevor Bauer Puts Out an Emotional Good-Bye Video to Indians Fans and His Teammates
Opinion: Indians Fans Shouldn’t Worry About Yasiel Puig, Franmil Reyes, and Even the Starting Rotation Until A Week