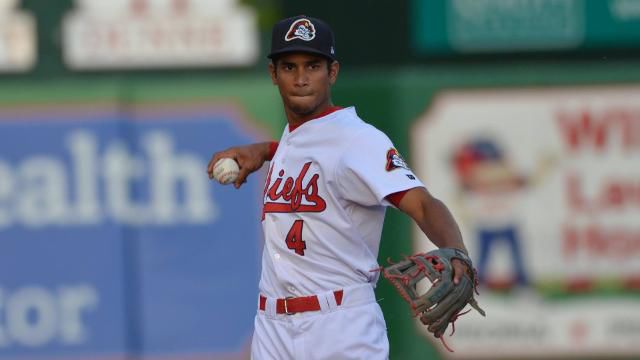 Indians fans have been clamoring on social media for weeks for the team to give a shot to young outfielder Oscar Mercado, and now it appears they are going to get their wish.

Mandy Bell of MLB.com reports that Mercado is on his way to the Windy City to join the Indians in their short two-game set against the White Sox.

Bell says that it would appear that Mercado will take the roster spot of Tyler Naquin, who is likely heading to the IL with a calf strain.

The 24-year-old Mercado was acquired this past offseason from the Cardinals, and played so well in the spring that many felt he was going to find his way on the teams’ opening day roster.

“He had one heck of a camp and we just told him that,” Tribe skipper Terry Francona said of Mercado back on March 19th.

“In the end, the way we’re situated, playing once or twice a week in April in Cleveland, first time in the [Majors], we didn’t think that was setting him up for success.”

In Triple-A Columbus he was hitting .294 with four homers, 15 RBIs and 16 walks to go along with 14 steals (he was caught three times).

Likely Mercado will be with the team in time for their game on Tuesday against the White Sox in the finale of the short two-game set.