One More Win: Indians a Game Away From World Series After Overcoming the Odds to Beat Jays 4-2 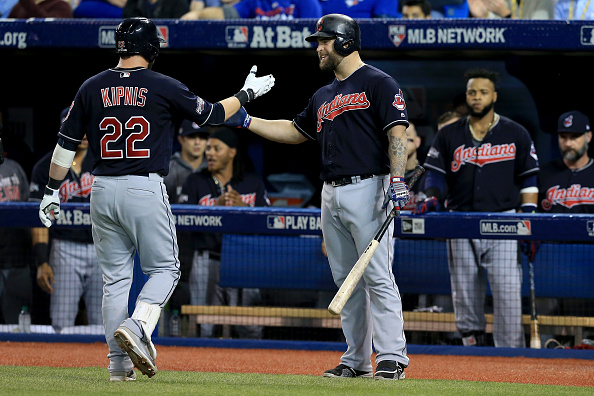 The Indians are down to two starting pitchers, have had more injuries than they can count, and have had to overcome things over and over just to be able to put a semi-healthy team on the field.

Oh by the way, they are one game away from the World Series.

Hollywood would pass on a script like the Indians, mostly because it doesn’t seem believable enough, but don’t tell Terry Francona and his team that.

Monday night they once again overcame all odds, losing starting pitcher Trevor Bauer in the first inning when his injured finger split wide open, but it didn’t matter, as they did enough to pull out a 4-2 victory.

They have a chance on Tuesday starting at 4:05pm with ace Corey Kluber on the mound to pull off a four-game sweep of a Toronto Blue Jays team that many thought would have too much offense for the Indians in the best-of-seven series.

Instead, Monday six Indians relievers again did the job, holding the Jays to two runs and pulling out a 4-2 win to firmly seize control of the series three games to none.

Monday’s hero’s included players that have done it all season, Mike Napoli, who finally came out of his playoff slump, hit a RBI double in the first and a solo homer to give the Tribe a 2-1 lead at the time.

Then in the 6th with the game tied, Jason Kipnis went deep to make it a 3-2 game, and then Jose Ramirez, who has done it time after time all season long, singled in Napoli to make it a two-run game.

That was enough for the best pen in baseball, which had to do a lot more than expected with the injury to Bauer limiting him to just 21 pitches.

Yes the Indians have to win one more game, but with the way this series has gone, it seems only like a matter of time that the team will be able to sit back and await the winner of the National League Championship Series between the Los Angeles Dodgers and Chicago Cubs to start the World Series a week from Tuesday at Progressive Field.