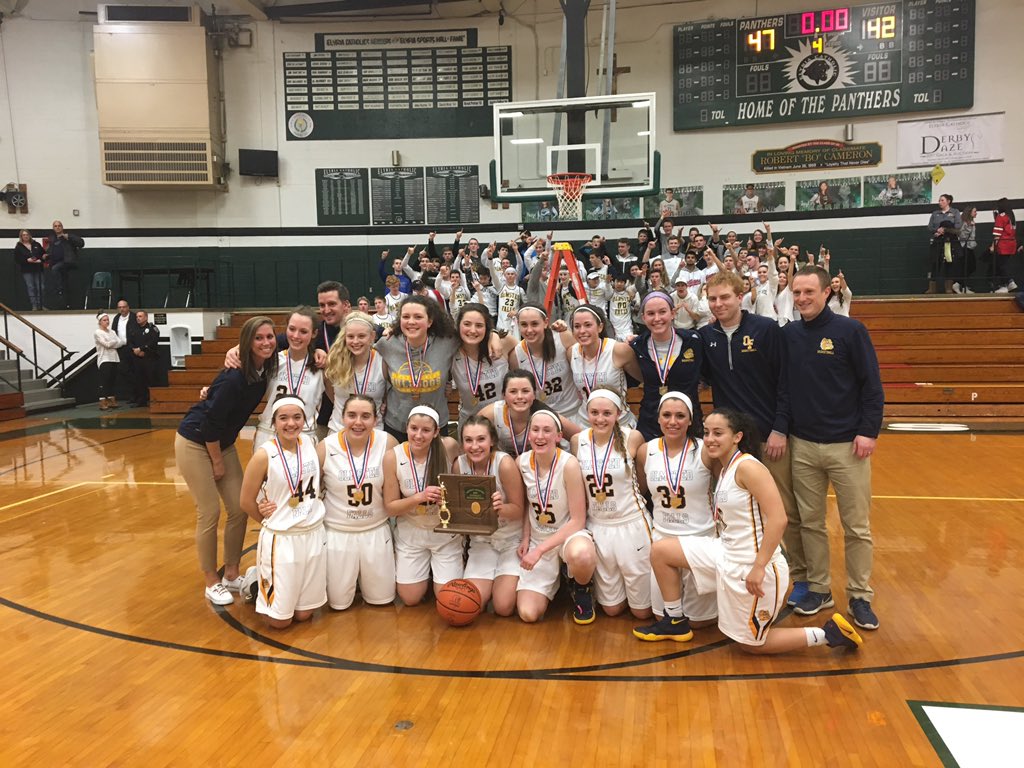 ELYRIA– For the first time in 35 years, the district championship trophy is heading to Olmsted Falls.

The Bulldogs battled back from a game long deficit, not gaining their first lead until there was just 45 seconds left in the game.

“Our kids believe in themselves, they believe in each other,” head coach Jordan Eaton said following the win. “They really trust each other and play together. And when you do that and have some good players like we have, you’re gonna be dangerous.”

Clare Kelly finished the night for Olmsted Falls with 13 points, including making eight out of 10 free throws. She also added 12 rebounds. Shannon Carr added 12 points for the Bulldogs, while Sarah Balfour had 10, including the jumper that gave Avon their first lead.

The Eagles played strong defense all night, preventing Olmsted Falls’ shooters from getting hot early. Ultimately, Kelly and Balfour would get hot when it counted in the final minutes.

Avon’s Elizabeth Flynn, who won the district semifinals against Amherst on a buzzer beater, dominated early. She had nine points in the first quarter and finished the night with 13. Combined with teammate Karlee Clements’ 15 points, it seemed that the Eagles were just the better shooting team.

Little by little, however, the Bulldogs began laying the groundwork defensively to mount their comeback. They started to face guard Flynn, with that defender giving up all help-side responsibilities. They also started to run their full-court press midway through the third quarter to fluster Avon.

Heading into the fourth, the Eagles held onto their lead, 32-26. Olmsted Falls’ spark plug came in the form of May Alhashash. She had lost time in the Bulldog’s rotation, but came in and had two critical layups early in the fourth and got numerous key stops on defense. According to Eaton, her play exemplified what their team is about.

Still down three with 1:40 left was when Balfour hit a dagger three-pointer from the wing to tie the game at 40.  Balfour struggled to hit shots early, but her work ethic is unparalleled. In fact, she was in the gym at 6 a.m. this morning, shooting 200 jump shots.

As a result she trusted herself down the stretch.  This led to her shooting the go-ahead jumper with 45 seconds left that would give Olmsted Falls a 42-40 lead. They wouldn’t look back.

“I was missing it the whole entire game, but shooters gotta shoot. I just trusted my shot,” Balfour said. “Basketball is a crazy sport, no matter what, any team can come back. Any team can win any game.”

After Balfour’s jumper, Kelly hit a few more clutch time free throws for the Bulldogs to seal the game. Like Balfour, Kelly continued to trust her shot until the very end.

“I had to just treat it like practice, block out everything around me, and trust that if I make the free throws we could get it done on defense.”

The Bulldogs will play in the Broadview Heights/Norwalk regional semifinal against the winner of the Toledo district final on Tuesday, March 7 at 7 p.m.