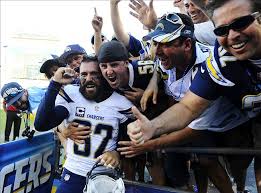 Respect your elders. Matt Hasselbeck and Adam Vinatieri led Indy to a victory and have evened their record to 2-2. Thank god they played Jacksonville and not any other team in the league. The Colts see a jump in our rankings due to some poor play by the teams below. Thursday night will hopefully see Andrew Luck back under center against the Houston Texans.

Well the Browns found a way to lose against this second team offensive line in San Diego. However a win is a win no matter how what and the Chargers will play host the Pittsburgh Steelers on Monday night. Danny Woodhead gashed the Browns defense and Philip Rivers finished with 23/38, 358yds, and 3 TDs.

Jumping up 4 spots and entering the positive spectrum of our power rankings, St. Louis put together a fine game against one of the top teams to play so far in 2015. Nick Foles found Tavon Austin for two TDs and added another one with a toss to Stedman Bailey. Perhaps the bigger story is the emergence of Todd Gurley who ended the day week with 146 yards on the ground with 19 touches.

Not the most impressive game from the Giants but the victory was huge for this team. Eli Manning throwing for three TDs and a big game from Rashad Jennings helped the G-Men win against a self-inflicted Buffalo Bills team. It will be imperative that the Giants find success this Sunday night against a lost San Francisco 49ers team.

Inside the Lines: Who to Take and Not Take This Weekend in College and Pro Football Action
The NEO Sports Insiders Staff Picks The Week Five NFL Games