Monsters Have Rough Start To Road Trip, Fall To Chicago 7-3 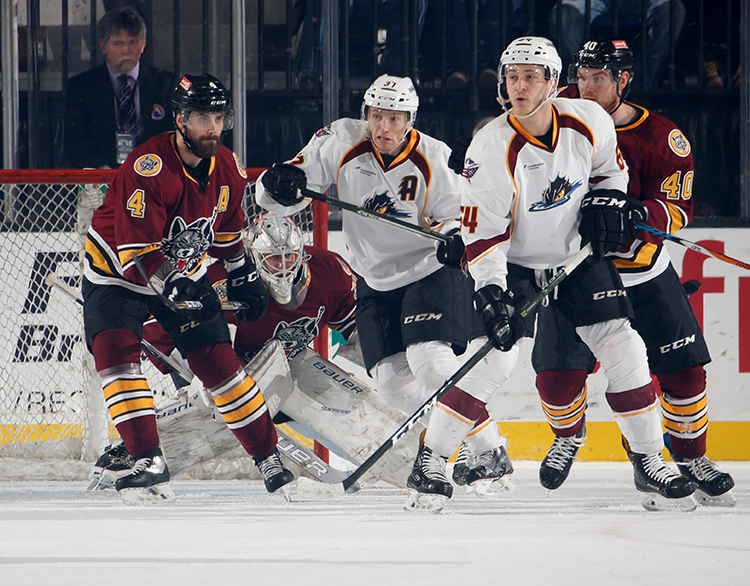 ROSEMONT, IL – The AHL’s defending Calder Cup Champions, the Cleveland Monsters, proudly powered by Constellation, were defeated by the Chicago Wolves on Saturday at Allstate Arena in Rosemont, IL by a final score of 7-3. With the loss, the Monsters fell to 25-24-3-4 overall this season and with a .509 points percentage, currently remain alone in fifth place in the AHL’s Central Division standings.

Monsters forward Markus Hannikainen staked Cleveland to a 1-0 lead at 2:40 of the opening frame with a power-play goal, set up by Daniel Zaar and John Ramage. Chicago strung together back-to-back even-strength goals, however, from Samuel Blais at 10:24 of the first and Brad Malone at 16:25, to take a 2-1 advantage into the middle stanza.

Chicago pushed their edge to 4-2 with another five-on-five Malone tally at 5:27 of the middle frame before an unassisted even-strength Akim Aliu wraparound pulled the Monsters within a goal at 3-2 at 6:04 of the period. Chicago went on to pot three more unanswered even-strength goals prior to the second intermission though, from Samuel Blais at 11:39, Scooter Vaughan at18:44 and Kenny Agostino at 19:27, to extend the Wolves’ lead to 6-2 entering the final frame of regulation.

Agostino struck again at five-on-five at 7:43 of the third to make it 7-2 before Alex Petan and Aliu combined to set up Ryan Stanton at 9:58 of the final period to establish the game’s final score at 7-3 in favor of Chicago. Brad Thiessen gave up six goals on 32 shots faced through 40 minutes of action between the pipes for Cleveland to fall to 2-6-1 this season while Jordan Binnington improved to 11-6-4 in net for the Wolves by virtue of a 25-save performance. ECHL call-up Michael Houseradditionally stopped three of the four pucks he faced for Cleveland in relief of Thiessen in the final period of regulation.

Next up for the Monsters, it’s a Wednesday road clash vs. the Milwaukee Admirals with full coverage, live from UW Milwaukee Panther Arena in Milwaukee, WI, underway at 11:30 am on 99X and the Monsters Hockey Network.