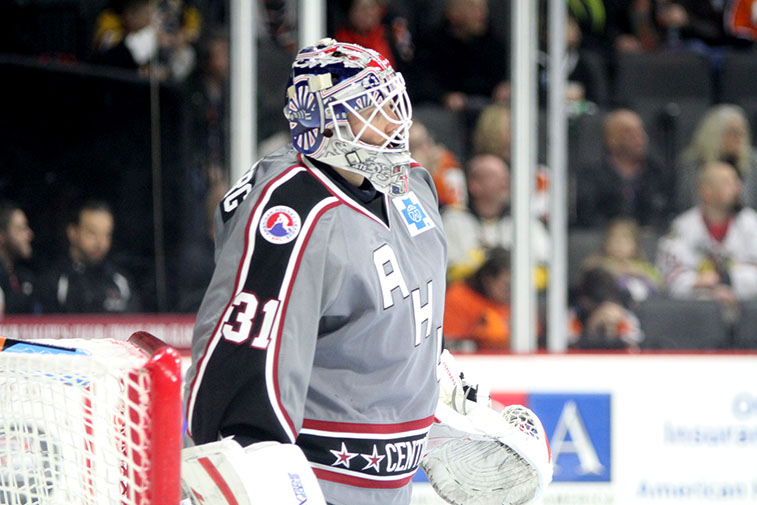 SPRINGFIELD, MA – The American Hockey League announced today that Cleveland Monsters goaltender Anton Forsberg has been selected as the CCM/AHL Player of the Week for the period ending March 26, 2017.

In three starts last week Forsberg allowed only two goals on 110 shots, good for a 0.67 goals-against average and a .982 save percentage, while posting three big wins over Central Division opponents.

A career-high 51 saves for Anton Forsberg as he chats with @TonyBrownPxP after a big 5-1 win over Iowa. 4 straight wins for @monstershockey! pic.twitter.com/aaI5EsLUHB

On Tuesday night, Forsberg made 20 saves as Cleveland downed Chicago, 4-1. On Friday, he stopped 51 shots – the most by any AHL goaltender in a game this season – to backstop the Monsters to a 5-1 victory over Iowa. And on Sunday, Forsberg earned his third shutout of the season, a 37-save effort in a 4-0 win over the Wild. Forsberg was named the game’s first star in all three wins, which left Cleveland in a virtual tie for fourth place in the Central Division with three weeks remaining in the regular season.

After backstopping the Monsters to a Calder Cup championship last spring, Forsberg has a record of 22-15-3 in 43 appearances for Cleveland in 2016-17, with a 2.29 goals-against average (10th in the AHL), a .926 save percentage (fifth) and three shutouts. The 24-year-old native of Harnosand, Sweden, is 68-33-9 (2.22, .923) with eight shutouts in 118 career AHL contests with Cleveland/Lake Erie and Springfield, and participated in his first AHL All-Star Classic earlier this year. Selected by Columbus in the seventh round of the 2011 NHL Entry Draft, Forsberg has also made 10 career NHL appearances with the Blue Jackets, including one this season.

In recognition of his achievement, Forsberg will be presented with an etched crystal award prior to an upcoming Monsters home game.

Next up for the Monsters, it’s a Tuesday home showdown vs. the Charlotte Checkers with full coverage, live from The Q, underway at 7:00 pm on 99X and the Monsters Hockey Network.