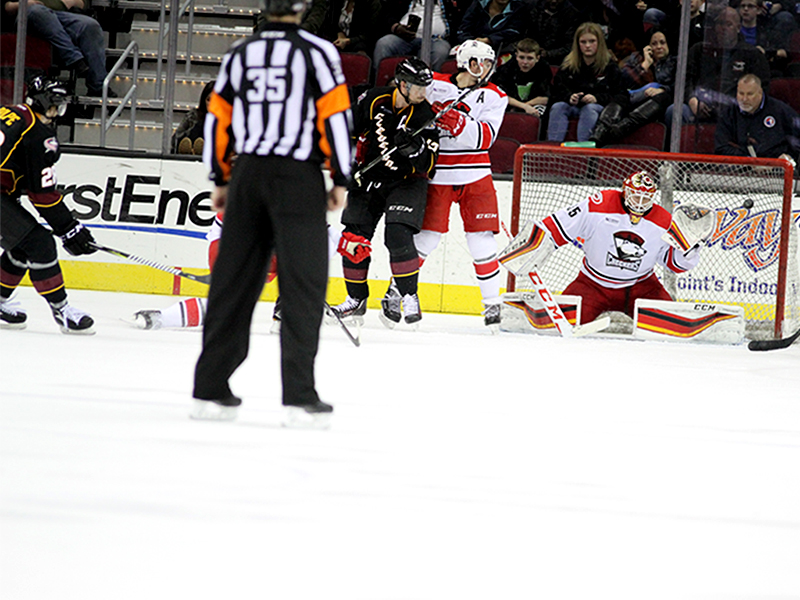 CLEVELAND, Ohio- Make that six in a row.

All it took was a return to the comforts of the Quicken Loans Arena for the Cleveland Monsters to turn it up just in time for a playoff push. The team came into Tuesday’s game boasting a season-high five game winning streak and looked to make it sixth when they took on the Charlotte Checkers. Cleveland and Charlotte were both sitting in fourth place before tonight’s game, so the matchup was definitely an important one.

The Monsters got on the scoreboard first with a Ryan Craig power-play marker at the 11:45 mark, as the Captain put home the puck right in front of Charlotte’s Tom McCollum off of a beautiful pass from Dean Kukan. Kukan would finish with three assists on the game, which he added “doesn’t happen every night”.

Charlotte would quiet the crowd with an equalizer in what was a weird sequence. Defenseman Ryan Stanton fell down and lost his man while writhing in pain. The Checkers would pot the puck with an awkward play that saw the puck hit off Forsberg and bounce up over his head for the marker at the 14:32 mark. The two teams would head into the break tied at one apiece.

A Dennis Robertson tripping penalty wouldn’t stop the Checkers early in the middle stanza. Patrick Dwyer would score the go-ahead goal for Charlotte, as he and Patrick Brown broke out to a two-on-one opportunity. Brown handled the puck all the way down before dumping it to Dwyer on the right side of Forsberg for the short-handed, back-door goal at the 4:06 mark. Markus Hannikainen netted the puck at the 17:01 mark of the second frame to make it a 2-2 game. Hannikainen broke away from the pack and went to McCollum’s left side to cause him to overcommit, leaving the top-shelf open for Hannikainen to slot the puck right in place. The two teams headed into the break now even at two apiece.

A very clean third frame saw the teams unable to pull away from each other, as the period ended scoreless. The overtime was required, as the two teams got ready for the five-minute battle.

In what has been a stretch where seemingly everything has gone right for the Monsters, they would prevail once again. Zac Dalpe would send the Cleveland fans happy with a wrister from the slot at the 2:21 mark that would sneak past McCollum for the 3-2 victory. Dalpe walked through the set-up for the winner.”We had a couple plays that we drew up and obviously they

“We had a couple plays that we drew up and obviously they didn’t work so we decided to run with it. Sometimes that works. So it paid off for us”.

Dalpe would mention Kukan’s fantastic game, saying that “everything he (Kukan) touched went to gold”.

As for Dalpe, he seems to be adjusting quite nicely with the Monsters.

“I think I’m settling in. Personally with that delivery with the baby and things were a little hectic and now I’m finally getting some sleep.”

“Yeah, there wasn’t a lot of clean hockey out there in terms of plays being made. I think a little bit might have been ice conditions. The puck was rolling on everybody, both teams. Hopefully, the ice will be better Thursday” said Coach Madden when talking about tonight’s game as a whole.

Overall, Coach Madden was pleased with the effort in the victory tonight. “We just found a way.”

Tuesday’s overtime victory makes it sixth straight wins for the Monsters. and puts them in control of fourth place in the Central Division. The team will finish the homestand with a game against Charlotte on Thursday before hitting the road for a game against Chicago on Saturday.