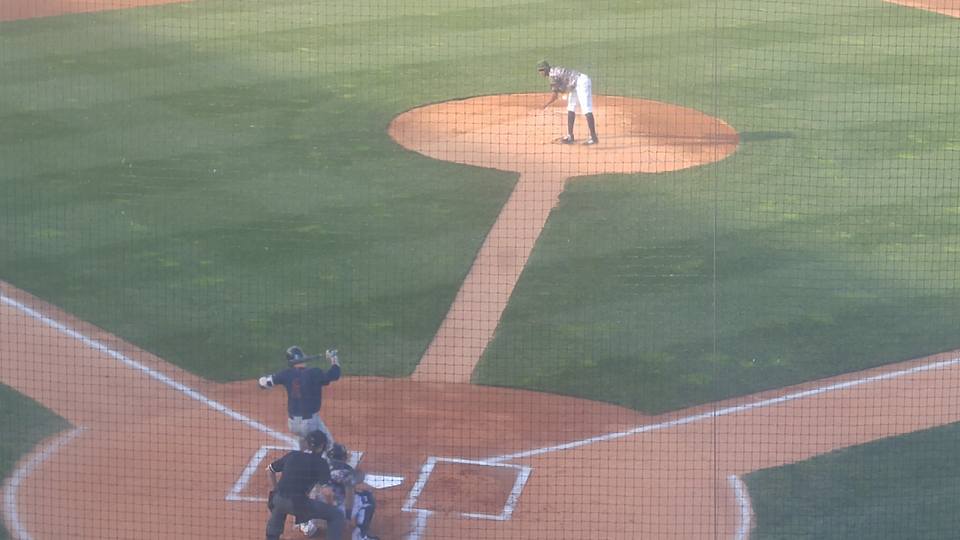 Lake County, Ohio – It was a rough season debut for Bowling Green starting pitcher Chris Park as the knuckleballer got little to no help from his defense.  The knuckle baller threw plenty of strikes, and pitched well enough to win, but sloppy defense behind him led to a Captains 8-2 blowout victory.

On the contrary, Juan Hillman of Lake County pitched very  well and received the proper defensive and offensive support to win.  He went five innings with 6 strikeouts.  He left the game after the fifth frame with a 7-2 lead.

The Captains also had their share of long balls as the night went on.  The Captains lineup powered up for homeruns by Gavin Collins and Miguel Eladio.

Bowling Green drew two walks, but left both men stranded as Juan Hillman had a pair of strikeouts to start the game.  The Captains immediately made the Hot Rods pay for it, as in the bottom of the inning, it was Li-Jen Chu drawing a two out walk which set the table for a 2-run homerun by Gavin Collins to deep left center field.

The Hot Rods continued to make mental mistakes in the top of the second inning as Jesus Sanchez tried to turn a single into a double.  He was ahead of the ball but came off the bag on the slide and was tagged out.  Sure enough, up next it was Miles Mastrobuoni piercing a single to center that would have got them on the board had the runner still been on second.

It was quickly made up for however as up next was number nine hitter Garrett Whitley who hit a two out, two run bomb to left to tie the game at 2-2.  Lucius Fox would strike out for the second time in two innings, to close the inning and keep the game tied.

After a quiet third inning that saw no one reach base for either team, things got crazy in the fourth.  With one out and no one on in the top of the fourth, a female fan is struck by the ball and hurt badly.  The delay lasts nearly 22 minutes but Hillman is unfazed as he came back from the long delay to get the next two batters out, retiring the side in order.

Li Jen Chu started off the bottom of the inning with a lead -off single.  Gavin Collins would follow with a single.  With two on and no one out, Emmanuel Tapia hit into what should have been a routine double play.  However, after shortstop Miles Mastrobuoni threw out Collins at second, it was second baseman Robbie Tenerowicz throwing it away.  This allowed Li Jen Chu to come around to score, un earned.

The un earned runs would continue, as Park would then throw a wild pitch, allowing Tapia to come around and score making the game 4-2.  After Medina struck out, it was Vicente reaching on an infield single to put men on the corner with still only the one out.  Park would settle down to force Rodiguez to line out for the second out.

The hi jinx would continue, allowing the Captains to pile on the runs.  Todd Issacs would hit a pop up single to right, scoring the fifth run, but then right fielder Garrett Whitley kicked the ball, and the damage continued for the sixth run to score on the play.  Park would then take things in his own hands by making a sliding catch on a pop up by Junior Soto to get himself out of the inning.

Juan Hillman of Lake County stayed hot in the fifth, setting the side down in order yet again. Keeping the score at 6-2 Lake County heading into the bottom half of the fifth.

Bowling Green decided to make a pitching change, removing Park and inserting  Jason McKinley.  On the first pitch from McKinley, it was Miguel Eladio welcoming him to the game rudely with a solo shot to left center, extending the Captains lead to 7-2.  The Captains would then tack another one on in the 6th to make it 8-2.  Along with one more in the eighth.

FOR FINAL STATS INCLUDING A BOX SCORE, STARTING LINEUP AND OTHER VITAL INFORMATION, SCROLL BELOW

Wind 6MPH out to the right

FLASHBACK: The 2001 WWF King of the Ring
Three Takeaways from Tribe’s 5-3 Loss to White Sox