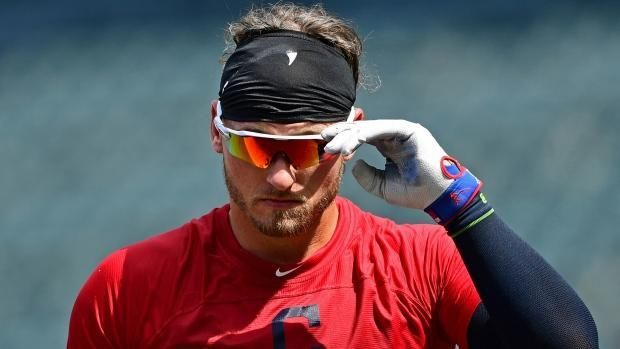 AKRON, OHIO– Whenever newly acquired Josh Donaldson comes up and join the Indians, it will be raining. Of course, not the rain that will come from the sky.

“The bringer of rain” is what Donaldson calls himself because he can hit dingers.

That’s what he did Wednesdauy night in his rehab game in Akron with the RubberDucks. He finished the game going 1-for-3 at the plate. His time on the field lasted six innings before heading to the clubhouse while shaking teammates’ hands, carrying his bats and helmet in the other.

“I feel pretty good,” Donaldson said. “[My] rhythm, my timing, pitch recognition feels good. Seeing the ball very well and My body is feeling even better. Any time my body is feeling right, I’m going to perform to my capability.”

Donaldson is making his second rehab start as an Indian due to an injury he suffered in May when he was a Blue Jay before being acquired on waivers last week.

On Monday in Triple-A Columbus, he hit a grand slam to center field, finishing the game going 1-for-2. Right now, watching him in person, the calf doesn’t seem to be a problem.

“The calf feels great,” he said. “Feels great getting back on the field and back moving around. I’m looking for coming back up and play some meaningful games.”

So far, he is 2-for-5 with two dingers and seven RBI’s in his rehab games.

But right now, the third baseman says he’s more ready than ever and wants to get going as soon as possible. The former MVP can’t come off the disabled list until September 11. Donaldson is a kind of player can get the Indians going heading to the postseason with his power he can provide in the middle of the lineup.

“It’s exciting, trying to get my head wrap around everything,” Donaldson said. “I’m looking forward to getting back with the club [Indians], getting around with the guys and help the club win games going forward.

Whenever Donaldson comes back to the club, he will hold a .234 batting average with five home runs with 16 RBIs.