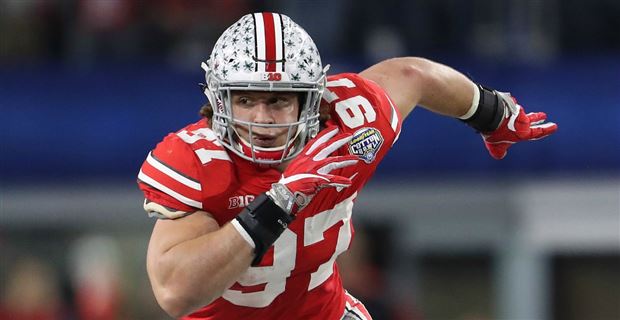 Ohio State will welcome in Rutgers University to begin BIG 10 play this weekend from Columbus.  Both teams are coming off big week one victories, and look to keep their momentum going.

Rutgers is fresh off of a 35-7 blowout of Texas State where they looked incredible.  The biggest threat for Rutgers was the running attack led by three separate outstanding tailbacks.  Isaih Pacheco, Raheem Blackshear and Jonathan Hillman all went for 60 plus yards with Hillman finding the endzone twice and Blackshear once.

One item that Rutgers will need to clean up if they have any chance at the shocking upset, will be the quarterback play of Artur Sitkowski who will look to overcome a three-interception performance.  Sitkowski had his moments however, as he did toss a touchdown pass and 205 yards.

The Rutgers defense held Texas State to under 170 yards.  The relentless attack held Texas state to only 69 yards on the ground, and 100 in the air.  They also forced Texas State quarterback Willie Jones into a costly interception.

Ohio State was overwhelming as they took no prisoners in their 77 – 31 beatdown of the Oregon State Beavers.  In his first game as starting quarterback, Dwayne Haskins proved the spot was his for the keeping with a monster day.  Haskins finished with 313 yards passing on 22 of 30 attempts.  He also tossed 5 touchdowns and ran for 24 yards.  Haskins appears to have full control over the high-octane attack of the Buckeyes.

Other big performers for the Buckeyes where tailbacks Mike Weber with 186 yards on 20 carries while scoring 3 times.  Not far behind him was J.K. Dobbins with 74 yards on 15 carries.  Master Teague was not to be ignored as chipped in nicely with 56 yards on 6 carries, scoring once as well.  As a team, the mighty Buckeye rushing attack compiled a healthy 369 bone crushing yards.

The one area the Buckeyes will need to improve on however, is the long ball.  They gave up touchdown scores of 49 yards (pass), 80 yards (rush), and 78 yards (rush).  That will have to be cleaned up and quickly.

These two teams will collide this Saturday at 3:30 from Columbus.  The Buckeyes come in as the fourth ranked team in the nation.  This will be their last tune-up before they travel to number 16 ranked TCU the following weekend in Texas.

While the Buckeyes prepare for their upcoming trip to Texas, you don’t have to travel nearly that far for outstanding food and game day atmosphere.  In fact, watching a game at “Gameday Tavern” is better then being on the sidelines.  They are the official watch party location for every big game, including Indians, Browns, Cavaliers and the absolutely best place for Ohio State action.

The food, the beautiful servers, the ice-cold drinks and beer specials, it’s a can’t miss!  In fact, during every Buckeye game you can get their world-famous Buckeye Burger for only $6.50.  They are so good, you may just have to order two!  After you get your fill, make sure you stick around after the game this week as the “The Social Workers” will be ready to rock the stage!

Introducing Game Day Tavern: The Number One Place To Watch The Ohio State Buckeyes This Season!