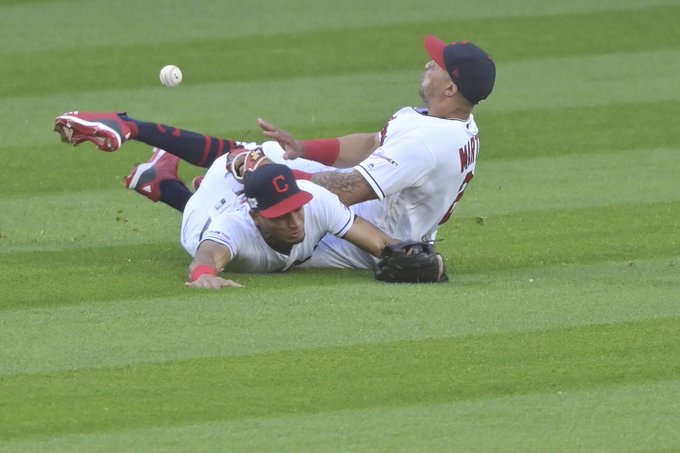 The Indians 2019 season appears on the brink, as with the Minnesota Twins building a lead in the AL Central and widening it daily, each mounting loss for the Tribe is getting tougher to stomach.

Such was the case Thursday night at Progressive Field, as former Indians coach Kevin Cash and the young Tampa Bay Rays went on cruise control with four homers, pounding the Tribe 7-2.

It’s the same script as Wednesday when the Tribe lost an afternoon affair to the Oakland A’s by the same score, again the starting pitching wasn’t that good, the bats were quiet, and the opposing pitching just threw strikes while Indians bats swung and missed a majority of the day.

This seems to be a time when the Indians could use any positives, and it’s just not happening, as even in defeat there was a scary moment in which Oscar Mercado and Leonys Martin slammed into each other on what ended up being an inside the park homer for Kevin Kiermaier.

Mercado left the game with a pelvic injury after an at-bat, and while it doesn’t appear serious, it’s just more salt in the wound of what’s going wrong with this team right now.

Here’s a couple takeaways from the latest defeat.

1. Bad from the Start

The Indians offense is doing nothing on a daily basis to make opposing pitchers work, and what’s worse it seems the last few games, the opponent is getting off to a fast start to put the game away quickly.

Such was the case on Wednesday when the A’s jumped to an early lead, and it happened again against the Rays, as they score three runs in the first two innings to make it a 3-0 lead.

The Indians are third in the Majors with now 15 games in which they have scored two runs or less, so when a team jumps to a 3-0 lead, it’s almost right now automatic that the Indians are going to collect an ‘L’.

Adam Plutko had a successful first start, but against they Rays they jumped on him and put the game out of reach by the time the Indians had their third at bats.

2. The Line on Plutko

After having to go the pen over and over in the A’s series, it was pretty evident that Terry Francona was going to keep Adam Plutko out on the mound no matter the situation in Thursday’s game.

The Rays just seemed to be patient to wait for their pitches, and when Plutko made a mistake, they didn’t miss, hitting a total of four homers in the win.

With still some time to go before Corey Kluber and Mike Clevinger return, these guys getting a chance to start simply have to be better.

It’s time that the guys that have been called upon to be the captains of this team have a closed door meeting and try to salvage not only this homestand, but maybe the 2019 season.

Jason Kipnis, Corey Kluber, Carlos Santana, Francisco Lindor – these guys need to make their voices heard, as over the last four days there just seems to be a dearth of energy from this roster and it’s showing on the field.

This team isn’t having fun, the fans are getting ready (if they haven’t already) to turn on them, and the losses and games out of first are mounting.

Forget about who you are playing, this team needs a couple days of solid baseball, on the mound and even more so at the plate.

Two runs, four hits and three walks with six K’s. That’s not going to win you many games, and the noose around this teams neck is really getting tight – it’s time for someone to get ticked off about it and say something.