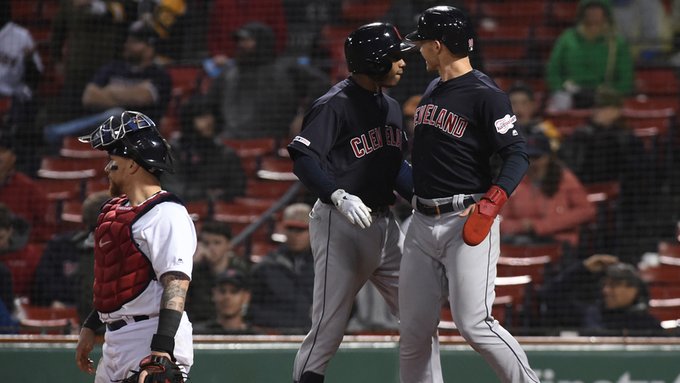 While quite a few Indians fans probably turned off their television sets after the Boston Red Sox took a 5-2 lead into the 9th inning – those that hung in were treated to the most memorable win of 2019.

The end result, an Indians 7-5 victory that saw them put up five runs in the 9th inning after the Red Sox pen imploded much like what fans recall from the Indians pen of 2018.

Roberto Perez and Greg Allen each homered in the 9th to tie the game, and Jordan Luplow won it with a great plate appearance in which he slapped a fastball to deep right off the glove of Mookie Betts Jr. to score two runs to win it.

24-year-old Zach Plesac made his Major League debut in the rain, and did a nice job in holding the Sox to one run on four hits pitching into the 6th inning.

The win puts the team even again at 27-27, but with the Twins earning a 5-3 win over Milwaukee Tuesday evening the Indians are still 10 games back of first in the AL Central.

The two teams will finish the three-game set on Wednesday with a first pitch set for 6:10pm.

Here’s a couple takeaways from a win that not many saw coming on a rainy night at Fenway.

If the Indians are preaching an attitude of ‘never say die,’ the 9th inning was maybe the best showing of that phrase all season.

The team, down 5-2 after allowing two runs in the 8th, rallied for five runs with a pair of homers, a key two-run double, and a couple very patient at bats which drew them free passes.

The Tribe sent 11 batters to the plate, and the total damage was five runs, three hits, four walks, and a hit by pitch.

Greg Allen’s first hit on the road tied it (a two-run homer with one out) and Jordan Luplow staying patient to draw a 2-1 fastball that he nearly hit out for a grand slam that went for a double were the key hits in the frame.

The team has talked about getting a spark all season – maybe, just maybe, this was it.

Walking Carlos Santana on 4 pitches to get to Jordan Luplow was a bold strategy, Cotton.

Youngster Zach Plesac did a nice job first having to start the game and wait out a rain delay, and then holding Boston for the most part at bay in his Major League debut.

The line score on Plesac – 5.1 innings, one run, four hits, a walk and two strikeouts. He threw 86 pitches, 57 of which were strikes.

He seemed poised against a very good lineup, and you can’t complain about a kid who never made a start in the Majors coming up against the defending World Series champs and holding them to a single run into the sixth inning.

3. A Night to Forget for Freeman

If there’s one player who needs to be breathing a huge sigh of relief after Brad Hand got the save, it’s that of Mike Freeman.

The veteran infielder got the start at second base, and his shoddy play basically allowed the Sox to push four runs across which nearly cost them the game.

The first two runs came directly on an error in the 6th that gave Boston a 3-0 lead. In the 9th he missed a tag on Xander Bogarts ruining a great throw by Greg Allen to allow Bogarts to reach second.

Bogarts later scored, and then Steve Pearce doubled in a run later in the inning to make it a 5-2 game. Safe to say that fifth run doesn’t score if Freeman makes that tag for the first out.

Also let’s not forget the 9th inning when he made a lazy slide into third base, a force out that was the first out of the inning.

On replay, he seemed to slide late on the bunt by Oscar Mercado, again a gaffe that he will want to forget.

In the end, he’d better thank those that got the job done that saved him from being a goat in this memorable win.