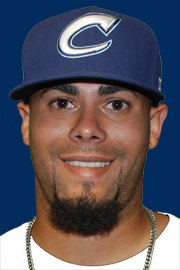 The Office of the Commissioner of Baseball announced on Friday that two Minor League players have been suspended following their violations of the Minor League Drug Prevention and Treatment Program.

Cleveland Indians Minor League pitcher Joseph Colon received a 50-game suspension without pay after a second positive test for a drug of abuse. Colon is currently on the roster of Triple-A Columbus of the International League.

Chicago Cubs Minor League pitcher P.J. Francescon received a 50-game suspension without pay after a second positive test for a drug of abuse. Francescon is currently on the roster of Triple-A Iowa of the Pacific Coast League.

The suspensions of both players will be effective at the start of the 2016 season.

In 2015, Colon transitioned from a starting pitcher to a reliever, and came out of the bullpen for Akron and Columbus. The right-hander made 12 appearances with the Clippers, posting a 3.12 E.R.A.

Does Manny Ramirez Deserve A Place In Baseball’s Hall of Fame?
Indians Agree to 1-Year Deal Worth $1.3 Mil. With RHP Zach McAllister