Indians Mount Comeback in Ninth, Inch Closer to Central Title with 4-3 Walk Off Win over Pirates 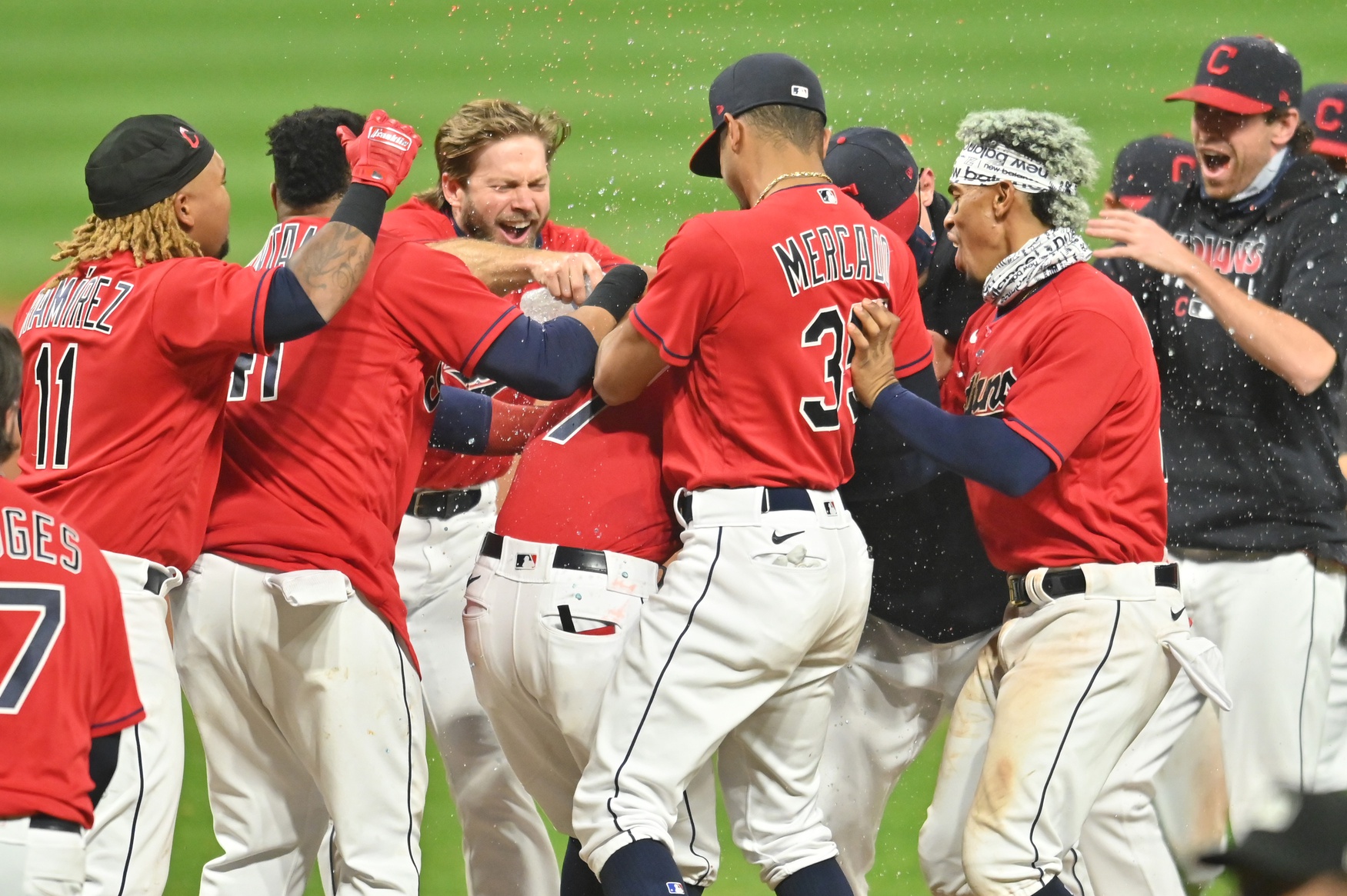 The Cleveland Indians sat two back for the American League Central division title with three to play, as they sent Carlos Carrasco to start on the mound Friday against the Pittsburgh Pirates.

Carrasco went six full, allowing three hits, but surrendered two runs to trail at the end of his outing. Ninth inning heroics would come once again however, as the Indians combined to score three in the inning, walking it off with a César Hernández single to win 4-3 over the Pirates.

Carrasco led the game off surrendering a walk to Adam Frazier, before forcing Ke’Bryan Hayes to ground into a force of Frazier at second for the first out of the inning. After the ground out, Carrasco returned to strike out Colin Moran, and Josh Bell to end the inning.

In the Bottom, Pirates’ starter Mitch Keller led things off walking the first three batters he faced to load the bases with nobody out. After a delay due to injury, Carlos Santana grounded into a double play that scored Lindor, but gave the Tribe the first two outs of the inning, before Franmil Reyes grounded out to end things in the first.

Both Pitchers settled down in the second, as a Sandy León walk in the bottom was the only baserunner produced by either side.

Carrasco continued to deal in the top of the third, striking out all three batters he faced in the inning.

Lindor drew a walk before stealing second to lead things off in the bottom of the third. However, César Hernández struck out and José Ramírez popped up, keeping Lindor at second with two outs now in the inning. Two straight walks from Santana and Reyes would keep things alive with the bases loaded, to no avail as Tyler Naquin lined out sharply to first to end the inning.

The top of the fourth didn’t bring the same fortune for Carrasco as the previous three innings. Despite opening the inning up with two quick outs, Carrasco would surrender a two-out single to Josh Bell, followed by a Gregory Polanco home run. The home run gave the Pirates a 2-1 lead, before Bryan Reynolds grounded out to end the inning.

In the Bottom, Keller continued to stifle the Indians bats, retiring the side in order to preserve his lead.

Carrasco kept things close in the top of the fifth, once again retiring the Pirates in order to keep the deficit at one.

Carrasco opened the sixth allowing a single to Frazier, followed by walks of Hayes and Moran to load the bases with nobody out in the inning. A mound visit would set Carrasco straight however, coming back to strikeout Bell, and force Polanco into a double play to tight rope out of the inning.

Nik Turley came on in the bottom in place of Keller, pitching a strong inning to retire the Indians in order to preserve the one run lead.

After Carrasco’s final inning in the sixth, Phil Maton came on in relief in the seventh for the Tribe. Maton kept the game tight, striking out two of the three batters he faced in the inning.

Sam Howard opened the bottom of the seventh on the mound for the Pirates, and Jordan Luplow led things off in a pinch-hitting role for Josh Naylor. Howard would strike out Luplow, before surrendering a one-out walk to León. In the next at-bat, Delino Deshields Jr. delivered the first hit of the game for the Indians, a bunt single that moved León to second.

The Deshields Jr. hit would prove to be all for naught, as Howard came back to force Lindor to fly out to right field, before striking out Hernàndez to end the seventh.

Maton came back on the mound to open the eighth, striking out Jacob Stallings, before the Tribe opted to call on Oliver Pérez to finish the inning. Pérez started his outing surrendering a double to Frazier, followed by a single to Hayes to give the Pirates a 3-1 lead.

After the score, Pérez forced Moran to ground out for the second out, before intentionally walking Bell to avoid the Pirates slugger in a tight situation. The intentional walk proved fruitful, as Pérez forced Polanco to fly out to center field to end the inning.

Facing a two run deficit late in the game, the Indians needed some magic to make something happen to keep their division hopes alive. However, Pirates’ reliever Chris Stratton would keep the Indians at bay, retiring the side in order in the bottom of the eighth.

Adam Plutko came on in the ninth to keep the deficit at two, opening the inning striking out Bryan Reynolds before forcing Erik Gonzalez to fly out for the first two outs of the inning. Jared Oliva battled for a two-out single to keep things alive, before stealing second to put himself in scoring position. To no avail, as Plutko forced Stallings to line out to right field to give the Tribe one final hope in the bottom of the ninth.

Naquin drew a lead-off walk from Stratton to open the bottom, before Luplow doubled to send Naquin home to cut the lead to one. Following up the double, Mike Freeman came on to pinch-hit for León, flying out to center for the first out of the inning. In the next at-bat Deshields Jr. singled on a ground ball to center, scoring Luplow from second to tie the game.

After Deshields Jr. tied the game, Lindor would line out to right field for the second out of the inning, keeping Deshields Jr. at first. However, a wild pitch during the next at-bat would allow Deshield Jr. to advance to second on a steal. Following the steal, Hernández battled Stratton for a single, scoring the runner from second, giving the Indians a 4-3 walk-off win over the Pirates.

Tribe Sweeps White Sox with 5-4 Come from Behind Win
Civale Struggles, Offense Gets Shut Down, Indians lose 8-0 to Pirates