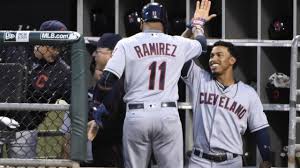 It seemed as if the Indians really had gotten their bats swinging again after going 13-8 in the last 21 games over 22 days of baseball by defeating the Detroit Tigers 11-8 at Commerica Park in Michigan Sunday.

The Pitching match up was Ace, Justin Verlander for the Tigers and Mike Clevinger on the bump for Cleveland and it didn’t start off good for either pitcher. Verlander pitched 3 and 1/3 innings and was unable to put together a strike out before being relived in the top of the fourth by Bell.

Lonnie Chisenhall  started it all off when he went yard with a two-run homer followed by the Indians being able to acquire seven runs off of nine hits in that time on Verlander giving the Tribe the upper hand and a commanding lead in the first half of the game off a pair of homers from Jose Ramirez resulting in four RBI’s.

Edwin Encarnacion with a triple, a double and two RBI’s on the day. Carlos Santana added to that with two doubles and three RBI’s as Cleveland’s offense was in full swing.

Clevinger on the other hand struggled in the first and then started rocking and firing after throwing 30 pitches in the first inning of the game. He went on to allow only one run on two hits in the six innings that he operated from the mound.

Leading 11-2, the Indians went into the 9th with  Boone Logan and Shawn Armstrong coming in to pitch and it was disastrous as they were unable to get the job done. Giving up six runs on ten batters until the dugout called to the pen and had Cody Allen up to close this one out getting the save.

Verlander drops to 5-5 and Allen gets his sixteenth save as the Indians get a much-deserved day off tomorrow before hosting the San Diego Padres on Independence Day at Progressive Field. The Indians improve their record to 44-37 leaving the Tigers trailing by eight games in the AL Central at 36-45.

Opinion: One of Many Reasons Why McGregor Stands No Chance to Defeat Mayweather
Jose Ramirez Leads The Way As Indians Have Five Players Named To All-Star Team