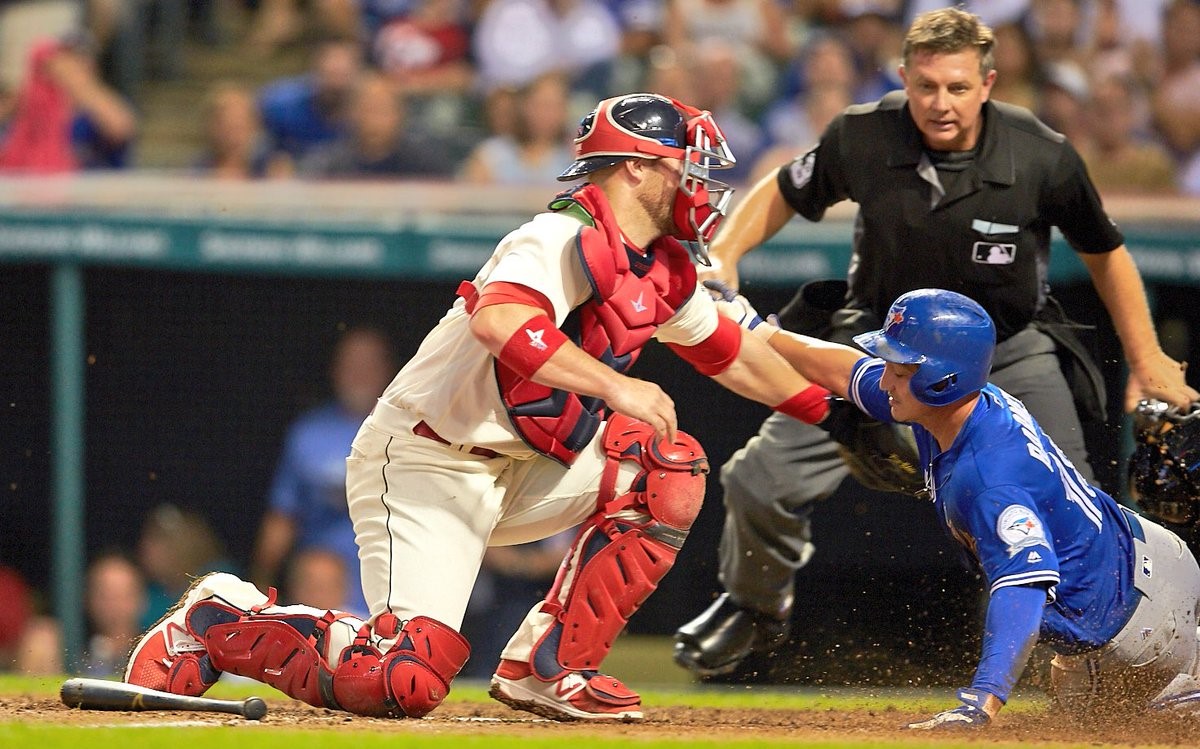 CLEVELAND– In front of their fourth sell-out crowd that was most likely split with half Toronto Blue Jays fans and half Cleveland Indians fans, whomever you supported you were entertained. In a game that looked like the Jays could have ran away with the game early , saw a turn of events when the Indians put up a 5 spot in the fourth inning, that tied up the game.

To start off the game the Toronto Blue Jays had Devon Travis lead off the ballgame with a single, two batters later Edwin Encarnacion also singled. That was the only major things that happened for the Blue Jays in the first inning.  The Cleveland Indians had nothing going for them to start off the first inning, Blue Jays starter, Aaron Sanchez struck out the side in order.

In the second inning, the Jays managed to score two runs. To start off the top of the second, Indians starter, Josh Tomlin set down the first two Blue Jays batters until Darwin Barney singled with two outs. Following Barney’s single , Ryan Goins hit a double putting runners at second and third with two outs. The next batter Travis hit in two with an infield single giving the Jays a 2-0 lead.

In the third inning, Russell Martin hit a solo homer to extend the Jays lead to 3-0. Troy Tulowitzki followed Martin with a double but Michael Saunders hit into a fielders choice leaving Tulowitzki to get caught between second and third. The next batter, Melvin Upton hit his second homer as a Blue Jay which was to Right-Center field. Blue Jays extended their lead to 5-0 in the third inning.

In the fourth inning Mike Napoli hit a sacrifice fly to center field with the bases loaded to put the Indians on the board for the first time during the game. Next batter, Jose Ramirez hit an RBI single to center. Lonnie Chisenhall followed up with a ten pitch at-bat that concluded with a 3-run homer to Right Field that tied the game up at 5.  The Indians sent 9 batters to the plate in that inning.

To start off the fifth inning, Encarnacion hit his 35th homer of the season, which gave the Jays the lead once again. Tomlin was taken out of the game after giving up a walk to Tulowitzki, Dan Otero came in on relief and got Saunders to ground into a double play to end the Jays half of the fifth. Also during the fifth inning, Sanchez was taken out for the Blue Jays after four innings of work and Joe Biagini came in to relieve Sanchez. Biagini set the Indians down 1-2-3, the Jays had the lead after five with a score of 6-5.

In the sixth inning, Barney and Goins hit back to back singles, Goins single moved Barney to third base. Next batter, Travis hit a ball to third and Barney was thrown out at the plate by Ramirez. The Jays didn’t score that inning mainly because of the play at the plate that prevented Barney from scoring.

After 1.2 innings of work by Otero , Bryan Shaw came in to start off the seventh inning. Otero only gave up two hits.

The seventh and eighth innings were quiet for both the Blue Jays and the Indians.

Roberto Osuna came in on relief for the Blue Jays in the ninth. Osuna set down the Indians 1-2-3 to close out the game getting his 28th save of the season. Biagini got the win in tonight’s game improving to 4-2 on the season. Tomlin falls to 11-7 on the season.

Blue Jays improve to 70-53 on the season and the Indians fall to 70-51. Corey Kluber starts tomorrow’s game against Marcus Stroman, first pitch is 1:10 PM.

Indians Announce Tonight’s Game Against the Blue Jays is a Sellout
Can Josh Tomlin Be Trusted on the Mound Right Now for the Indians?