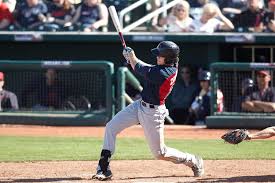 The Indians made it official Tuesday afternoon that the team has called up top prospect Bradley Zimmer from AAA Columbus.

Being the center-piece of the Indians minor league organization since 2015, Zimmer is the guy Indians fans have been clamoring to see after an impressive spring and platoon of veterans in the Cleveland outfield.

After word came down that Abraham Almonte was headed to the 10-day DL with a right bicep strain, the call was not the expected move by the Indians, who are known for being very patient with prospects.

Built on an impressive 6-foot-5, 220 lbs. frame, Zimmer has looked the part of a stud and drawn high praise since being drafted.

In the midst of putting together his best season as a pro, Zimmer made the Indians’ front office mind by proving his time. Batting .294 in 33 games this season for the Clippers, Zimmer has five home runs and 14 RBIs and 11 doubles.

His range in center field will be the best we’ve seen out of a young Indians prospect since the days of Grady Sizemore while he can swipe bags with the best of them.

Where some liability falls for Bradley is strikeouts at the plate. In 126 at-bats this season, Zimmer has struck out 43 times.