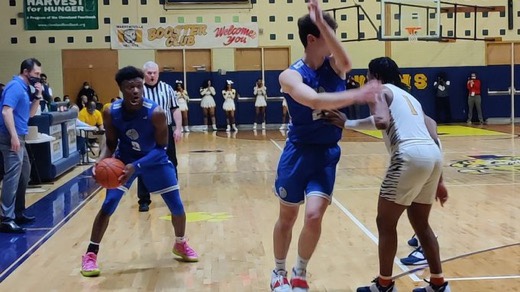 He took a hard fall, landing on his back and missing teeth in the second quarter while diving for a loose ball, sidelining him for a couple minutes.

Rodgers would return and become the hero for the Lancers by draining the game-winning three-pointer to upset Warrensville Heights 47-46 to advance to the Division II, Northeast 4 District Championship Game.

“I was supposed to come off the two double screens and they were supposed to draw attention to me,” Rodgers said.

“Then I was going to pass it back to the guy releasing for the three, but it didn’t work out so I had to be creative.”

Creative he was in a grind-it-out game that was as physical as they come.

“It was very physical,” Rodgers said.

“Both teams went at it. But, I think we came out as the more physical team.”

Rodgers’ moment was set up by a designed foul on Tigers’ Tyishawn Smiley, sending him to the free-throw line with little time remaining.

“When you foul that early, you get the ball back,” Lancers coach Dan DeCrane said.

“(Smiley) made both (free-throws) and I’m like: ‘you know what. We can go down there and have nothing to lose… I just didn’t want the buzzer to go off with the ball going in it for them when maybe we can control it in a different way that they weren’t looking for.”

It worked for them to relieve the Lancers from the past three times these three teams faced off in the playoffs. In 2014, 2017, and 2018, the Lancers were unable to slay the Tigers many of the Seniors were there in 2018 and were aware of the past.

“We wanted to go and play for our teams that lost to (Warrensville Heights), ” Rodgers said.

“That was always in the back of our heads. We came out and played for them.”

The Gilmour Academy found themselves down 13-10 at the end of the first quarter, but found their stride were able to put points on board with Ben DeMell scoring 6 points in the quarter. This helped cut the Tigers lead to 23-22 at halftime.

According to DeCrance, the Lancers utilized their bigs on the inside to contain the Tigers’ Jaden Hameed (13 points), Ramelle Arnold (10 points), and Smiley (11 points).

“What our goal was, was the big three. Hameed, Arnold for sure. They can score from anywhere from inside the volleyball line, if nor further. And Smiley..,” he said.

“We wanted to clog the lane with our bigs and let everyone chase their best players around… We just didn’t want their three best guys to beat us.”

The Gilmour Academy’s bigs, like DeMell, and leading scorer Ryan Mueller (11 points, 3 blocks) showcased their effectiveness in the post to produce points in the paint.

The Lancers fired on all cylinders in the mid to the end of the third quarter with a 10-0 run to lead 35-30 entering the fourth quarter.

“We knew that we had all the momentum, but our focus was on keeping it,” Rodgers said.

“Warrensville Heights goes on their runs. Those two 1,00 points scorers (Hameed, Arnold) we knew that we had to contain them.”

Warrensville Heights finishes their season with a 13-6, 8-3 in Lake Erie League record.

The Gilmour Academy’s record goes to 9-9 and advances to the Division II, Northeast 4 District Championship Game, where they will face 11th seed Padua Franciscan on Saturday, Mar. 6 at home.