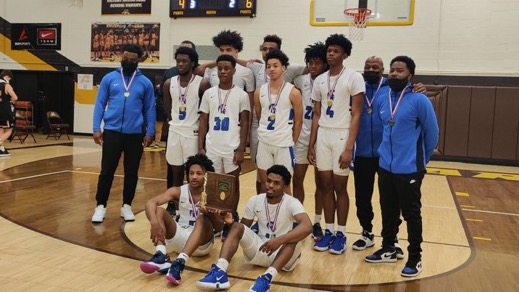 The first-seeded Richmond Heights Spartans were short-handed with the loss of starters Jamar Talbert Jr. and Amarion Dickerson.

It was a next-man-up mentality for the Spartan, who responded to the challenge as they handedly defeated No. 2 seed Dalton 67-39 in the Division IV, Northeast 3 District final to earn their third consecutive district championship.

“We’re just staying the course; staying focused.” Spartans coach Quentin Rodgers said. If [last year] didn’t teach you nothing. Enjoy the moment while you have it and stay locked in.”

Despite losing players to injury, Richmond Heights adapted by utilizing their height advantage over the Bulldogs.

A prime example was 6-foot-6-inch, Junior Preist Ryan who scored a team-high 29 points. He showcased his abilities in the post, in transition and on the three-point line.

Feeding Ryan the ball on many occasions was Lorenzo Nettle Jr., who used his playmaking skills to give teammates easy looks at the basket to total nine assists.

“In my opinion, he is the best guard in Cleveland. He dishes the ball so easily. He gives all of us our looks. He is an amazing player to have on our team.”

They held a firm 36-18 rebounding advantage over Dalton. The Spartans also forced 16 turnovers, many of those resulted into points on the other end.

Jaiden Cox-Halloway blocked four shots and grabbed eight rebounds for the Spartans to go with his 11 points.

The game didn’t start with Richmond Heights being as dominant.

The game was neck-and-neck for the first quarter and some of the second quarter.

The momentum began to tip in the Spartans favor soon after the Bulldogs’ starting player Jalen Wenger rolled his right ankle with just less than 7:00 left in the second quarter. He was helped off the court and taken to the locker room.

Wenger would eventually come back to play in the second quarter, but not before Richmond Heights took a commanding 30-17 halftime lead after the Spartans closed the half out with a 12-0 run.

Richmond Heights picked up right where they left off in the third quarter by going on a 21-2 run to enter the fourth quarter with a 53-44 lead.

Richmond Hts picking up right where they left off they lead 47-20 in Q3.@Spartan_Hoop @DaltonLocal pic.twitter.com/JTjrTX8WQA

Dalton finishes their season with a 19-5, 13-1 (Wayne County League) record and a league title.

Richmond Heights advances to the Division IV, Region 13 semi-final as they take on fourth seed Bristol on Tuesday, Mar. 9 in Firestone High School in Akron, OH.

Two year prior, Bristol and Richmond Heights met in a regional semi-final game, which the Spartans easily won 66-34.