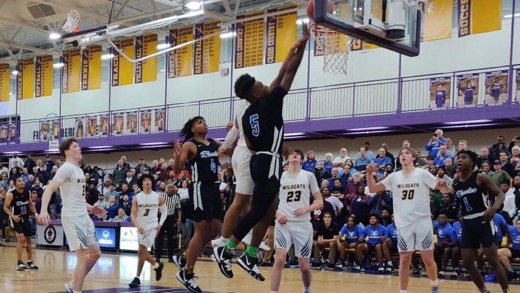 CLEVELAND – A good argument can be made that No. 3-seed Rhodes’ Senior Deangelo Williams had the Rams best performance of the season in their first round win against Parma.

But, against the No. 2-seeded St. Ignatius, Williams may have had Rhodes’ best moment as he made the game winning basket in overtime to defeat the Wildcats 50-48 in overtime to advance to the Division I, Lakewood District finals.

“From my point guard Jamal (Sumlin) to hit me down there like that. That’s some good eyesight. I’m thankful he is my point guard.”

According to Rams’ coach Shawn Spencer, he liked how Hakizimana Milan was playing, but he fouled out in the overtime. Spencer adjusted by putting Williams in before hitting the game-winning and-1 with 1.5 seconds remaining in overtime.

After the and-1, (15-4) Rhodes received a technical foul for an illegal substitution, Wildcats’ Jon Effertz missed both free-throws after Williams missed his free-throw.

1.5 seconds still remained on the clock. (15-9) St. Ignatius was given the ball in the front-court, because of the technical foul.

“I feel off [his man] and I read (Yarlan),” Landingham describes the steal.

“He was looking kind of jittery to get [the ball] in… I looked him in the eyes. I read [the play] and he threw it.”

Landingham was the leading scorer for the Rams as he had 18 points. The majority of his baskets came from 3-ball.

Last year, the Wildcats knocked off Rhodes in the Sectional finals. Landingham admitted it felt good to get revenge on St Ignatius in the tournament.

In order to get revenge, Rhodes had to overcome two 7-0 St. Ignatius runs late in the third quarter to give the Wildcats a 39-29 lead heading into the fourth quarter.

The fourth quarter started off with a Rams’ 11-0 run that last for almost five minutes to cut the lead. St. Ignatius was unable to score a basket.

“[On defense], we change a few looks,” Rhodes coach Shawn Spencer describes the defense in the fourth quarter.

Considering the rough first and second quarters, Rhodes made up for it in the fourth.

“I thought we were in trouble, honestly. We only scored 3 points [in the first quarter],” Spencer said. “Kudo’s to [my players]. Way to pull it out.”

Both teams were slow to start the game. The first basket was scored by St. Ignatius’ Henry Raynor with 4:45 remaining in the first quarter, a 3:15 scoring drought by both team that was filled with turnovers.

The Wildcats got into their groove faster than Rhodes as they finished the first quarter with an 8-3 lead and a 20-13 lead at halftime.

This is Rhodes’ second straight overtime win in their two tournament games and will have their hands full as they face state powerhouse St. Edward on Saturday, Mar. 5 in the Division I, Lakewood District final.