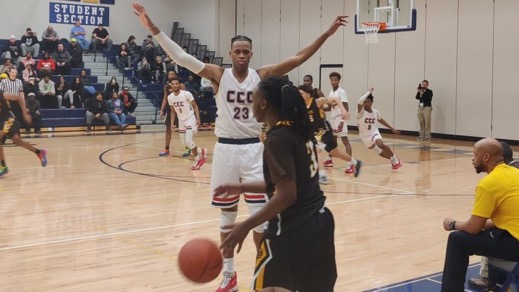 In the No. 1-seeded Cleveland Central Catholic’s two overtimes against the No. 4-seeded East Tech. They had to directly face one of their potential achilles heel by going to the free-throw line 22 times.

“We have been harping on our kids about free-throws in the postseason, because it can send you home,” Cleveland Central Catholic’s coach Jordan Duke said.

This time, their free-throws ended up saving their season as the Ironmen made 16 of their 22 overtime free-throws to defeat the Scarabs 65-58 in double-overtime in the Division II, North Ridgeville District semifinals.

After hearing the Ironmen’s free-throw stats in overtime, coach Duke considered buying his team a pizza to celebrate.

Tevin Jackson, after making 4-of-8 free-throws in the fourth quarter, was one of the main scorers in the overtimes as he had 8 points and was 6-of-8 from the line.

“We had a stretch where we weren’t doing so good [from the line], but to come out here in a big game like this and make free-throws. It’s amazing.”

Jackson finished with a team-high 18 points, while shooting 2-of-12 from the field and 13-of-20 from the free-throw line.

Arthur Fayne also had a huge impact on the charity stripe. He was also 6-of-8 in the overtime periods to finish with 11 points (2-of-9 from the field).

From the start of the second overtime to the less than a minute remaining, the Ironmen went on a 11-3 run to seal their spot in the district final. Fayne and Jackson scored all but 2 points in the run.

“There was only about only two or three guys scoring that much. So, we made sure they weren’t trying to touch the ball and keep it out of their hands.”

Senior Deshaun Nettles had a near triple-double with points (11), rebounds (14), and blocks (nine).

As the game continued, the bigger his impact was on the defensive end. Six of his nine blocks came in the second half and the overtimes.

Nettle’s 14 rebounds helped give the Ironmen a 39-27 rebounding advantage over the Scarabs.

“[Rebounding] was a big part of our gameplan,” Jackson said.

One of our keys was to win the rebound battle and we knew (East Tech) weren’t as big as us and as physical as us. So, we told (Terran) T-Mack and Deshaun (Nettles): ‘make sure on every shot, you guys are going in there and grabbing rebounds and trying to get put-backs.”

Cleveland Central Catholic had 14 offensive rebounds and Mack totaled with seven to go with his 11 points.

The game was close the entire time. The biggest lead was (18-6) Cleveland Central Catholic with a 9-point lead with 6:31 remaining in the second quarter before (15-10) East Tech went on a 14-3 run to enter halftime with a 27-25 lead over the Ironmen.

The fourth quarter was full of interesting events.

The quarter started off with a scoring drought that lasted for over three minutes for East Tech.

With 1:50 left, Scarabs guard Marcos Vazquez stood over Nettles after blocking his shot and exchanged words. The referees did not give him a technical foul for taunting, but coach Duke, at the time, was visibly upset for the no-call with the Ironmen leading 43-40 with around 2:00 remaining.

According to coach Duke, the referees informed him before the game that they won’t allow the teams to taunt, or talk to the other team during the game.

A few moments later, an East Tech cheerleader ran accidentally ran onto the court. The Scarabs were given a warning instead of a technical foul.

Finally, before the fourth quarter buzzer, Charles Knuckles almost made a desperation 3-point heave as it bounced off the rim to send the game to its first overtime.

Cleveland Central Catholic moves on to the Division II, North Ridgeville District final and will play the winner of Holy Name and Rocky River on Mar. 7.