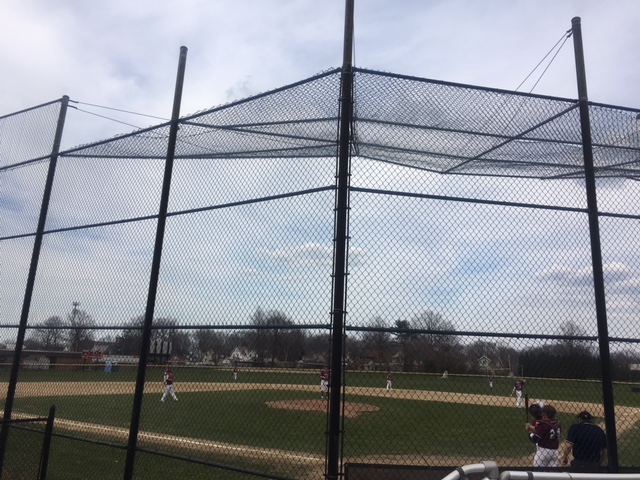 ROCKY RIVER, Ohio– Finally some warm weather greeted the Rocky River Pirates and the Parma Redmen as the two Great Lakes Conference foes met again Monday at Rocky River High School. The Pirates defeated the Redmen 5-1 last Friday and the Pirates looked to complete the season sweep of the Redmen.

River got off to a quick start, plating one run in the first, while Parma tried to answer right back, loading the bases on two singles and an error. Pirates starting pitcher, Ross Hartman, settled down and threw three straight strikes to get out of the jam.

Frank Strasek of the Pirates advanced to third when Parma starting pitcher Post had a pickoff attempt sail past the first baseman and went out of play. Will Sharp and Cam Blue both walked to load the bases and give the Pirates a chance to get a big lead early in the game. Tommy Kelly got his first of two hit by pitches in this game to get a run in and put the score at 2-0, which would be all the damage the Pirates would do in the bottom of the second inning.

Hartman helped his own cause at the plate today, hitting a lead-off triple on the first pitch he saw in the bottom of the third. Jack White, who threw a complete game for the Pirates the last time these two teams played, singled him in to extend the Pirate lead to 3-1. After some miscommunication in the field, Post got three straight outs to get out of a jam for the second straight inning and limit the damage done by the River hitters.

“Ross had a big game today, producing when we needed him to. That’s why we bat him in the four-hole,” said Rocky River Head Coach Daryl Sanders after today’s game.

Inconsistency, unfortunately, seemed to be a problem on the hill for Post today. It seemed like he had a little trouble starting innings by allowing hitters to reach base before settling down and getting outs at the end of innings.

Parma had their best chance to chip away at the Pirates’ lead in the top of the fourth, as a couple errors by the Pirates’ infielders allowed the Redmen to get runners on the bases. Smenda would knock in a run to put the score at 3-2 and Parma would tie in the very next batter as Hartman balked to bring in another run.

Hartman would redeem himself as he continued his heavy hitting his next at-bat as he hit another triple, scoring Ryan Dunning and Tommy Kelly to put the Pirates back on top 5-3.

McDaniels came on to pitch for the Redmen in the bottom of the fifth. This was the inning where Rocky River’s offense really took over. The River hitters laid off bad pitched and produced quality at-bats, which allowed the first three hitters to reach base via walks. Owen Jaite drilled a pitch over the right fielder’s head and hit another bases-clearing triple to break the game open and make it an 8-3 River game.

This was the second straight game where Parma’s relief pitching had a tough day on the mound. After Jaite’s triple, Kelly would again get hit by a pitch and McDaniels day on the mound would be done. His replacement would unfortunately continue to struggle, as River would load the bases with no outs for the second time in the inning. Eight hitters would come to the plate and five runs would score before Parma made an out in the bottom of the fifth. River would score two more runs too put the score at 12-3 when the inning ended.

The Redmen would only get two more runs the rest of the game and would fall 12-5.

A key point in the game today was that the pirates would have quality at-bats and advance runners that got into scoring position, a key component in winning games. Parma also produced quality at-bats, however, they were unable to advance those runners across the plate to produce runs.

Sanders also had this to say after the game, “We had timely hitting and good at-bats. We were glad to get the game in and we were happy about our offensive output today.”