Green flying under the radar, over the rim in preseason action 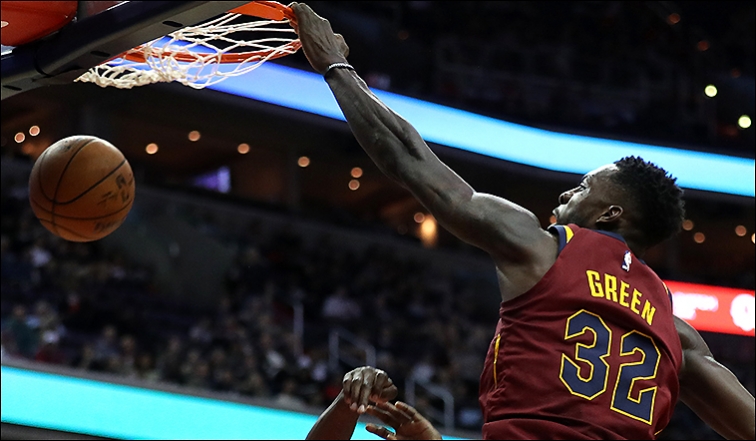 CLEVELAND – The flashiest moves of the offseason have cast a shadow on Jeff Green.

Lost in the shuffle of acquiring Isaiah Thomas, Dwyane Wade and Jay Crowder was the signing of the 31-year-old stretch-four, a one-year deal worth $2.3 million, officially announced on July 11, 2017.

Even in the preseason, the short-term investment is providing glimpses of its potential.

Green sparked the second unit in the Cavaliers’ 108-94 loss on Tuesday night at Quicken Loans Arena, scoring eight points on 3-of-5 shooting, including a full-extension slam with the right hand in transition…

Despite the departure of Kyrie Irving, Cleveland has bolstered its second unit with Green, a 10-year veteran and former fifth overall pick out of Georgetown University. His 6-foot-9 frame bodes well on both ends of the floor, as shown by the team’s +9 scoring differential when he was in the game.

“I thought the second unit was great in that first half,” said head coach Tyronn Lue. “They’re coming off pindowns, catch-and-shoot, moving the basketball, moving bodies. We have runners in that second group.”

This burst of production has been a trend throughout October, with Green averaging 10.7 PPG, 4.7 RPG and 1.7 APG on 48% shooting in his three previous games (20.1 MPG). With Richard Jefferson leading the bench in points per game (5.8 PPG) during the 2017 NBA Finals, Lue will certainly pursue new options in 2017-18.

“Jeff, just rebounding the basketball, getting off the glass and attacking,” Lue said of the fast-emerging forward on his roster. “Being able to catch and go, getting to the basket, but also being able to facilitate from the elbow.”

Green has overcome his fair share of adversity, missing the entirety of the 2011-12 campaign after undergoing open-heart surgery. The scar drew national attention when he published a piece for The Players’ Tribune prior to training camp…

As the Wine and Gold continues to roll out new rotations – especially when Thomas potentially returns in January – look for Green to play an integral role amid a championship-caliber roster moving forward.

“As we start adding things offensively, things will get a lot easier for [Green], also,” said Lue.

Indians fall to Yankees in Game 4 of the ALDS; three takeaways
Cavs Fall To Bulls 108-94 In Pre-Season Action; Three Takeaways From The Loss