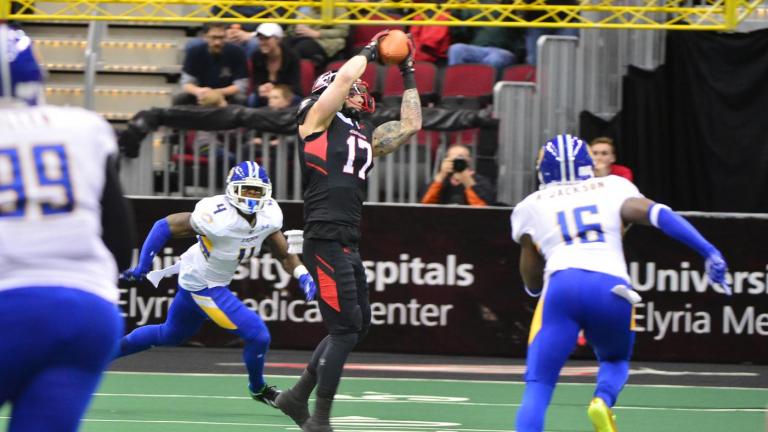 CLEVELAND, OHIO – With a packed house for the season opener, the Cleveland Gladiators went up against Tampa Bay Storm, where they fell short 46 – 40.

It was a constant battle between both teams as there were five lead changes throughout the whole night.

Tampa Bay answered first with a pick six early in the first quarter to make it a 7-0 game. Cleveland bounced back after a Collin Taylor touchdown to tie it up early in the second quarter. Tampa Bay’s Joe Hills made a clutch catch in the back of the end zone to put the lead back in Tampa’s favor.

Shane Boyd connected with Taylor again in the end zone for the second time in the game to, once again put Cleveland back on top with 13-14 score. The Storm scored again as Hills got his second touchdown of the night to make it a 19-14 Tampa Bay lead. The lead would change one more time as Brandon Thompkins would catch a 24 yard TD pass from Boyd with 11:35 to go in the 3rd quarter.

With that touchdown, that would be the last time Cleveland would lead in the game as Tampa Bay scored 14 unanswered points. The Gladiators would once again make it a game as they ran in a 2 yard touchdown to make the game within 4. After this, both teams would score two more touchdowns each and the final score was 46-40.

After the game, I caught up with starting Quarterback Shane Boyd, where he stated “I’m proud of the way our guys battled out there tonight. We had battled a lot of adversity, we overcame some of those and faced a good team.” He continued to say “I’m proud of how we battled, it was the first game of the season and a lot of the first game of the season is just getting the kinks out and getting in the flow of the season and as a team build off that and look forward to next week.”

The Cleveland Gladiators start the season 0-1 but look to get their first win of the season as they take on Baltimore next week at home.