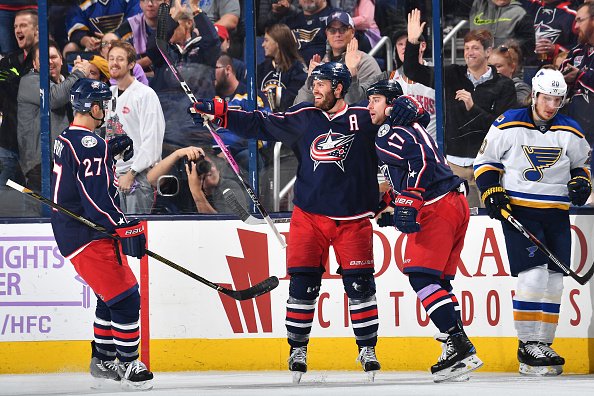 After finishing in last place out of eight teams in the Eastern Conference Metropolitan Division in 2015-16, Columbus currently sits in fifth place in the division, despite playing the fewest games in the conference.

All but three other teams in the conference have played at least 15 games, meaning they had an opportunity to earn four or more points than Columbus.

Although it’s only 13 games and the team has a long way to go, hockey fans in Columbus have reason to be excited.

The team made national headlines a little over a week ago, when they shut out the previously unbeaten Montreal Canadiens, 10-0.

This past weekend, the Jackets dominated the St. Louis Blues 8-4, and two of the four goals allowed by Columbus came in “garbage time.”

The common theme in the young season for the Blue Jackets has been home ice advantage.

Columbus is 5-2-0 in games at Nationwide Arena, earning 10 of their 16 points in front of their fans.

The Jackets are 2-2-2 on the road, which although it’s an area the team will need to improve, is more than respectable considering how much the team struggled last season.

Perhaps the biggest test of their season so far comes on Tuesday, Nov. 15, when the Jackets host the Washington Capitals.

All eyes from around the league will be following what happens in this one, as Washington is one of the favorites in the Eastern Conference and the Blue Jackets are just starting to grab the attention of fans outside of Columbus.

Not many expected Columbus to even be in the playoff race this season, but they have been one of the biggest surprises in the NHL through the first month of action.

Keeping in mind, it’s an 82-game season, this game against the Capitals seems like a night where Columbus can make a statement.

Although the Jackets may not have that trademark star, like Alexander Ovechkin, of the Capitals, it’s been great team hockey and some rising stars, leading the way in Columbus.

One of the major difference makers early in the season has been rookie defenseman Zach Werenski, the eighth overall pick in the 2015 NHL Entry Draft out of the University of Michigan.

The former-Wolverine first burst onto the professional scene right here in Cleveland, Ohio, playing a key role in the Monsters’ run to the Calder Cup Finals.

Werenski picked up right where he left off, as the rookie is putting together as great a start as any first-year players in the league early in 2016-17.

The 19-year-old has scored four goals and contributed eight assists in 13 games.

Rookie or not, those numbers are remarkable for any defenseman, as Werenski is tied for the fourth-most points among players at his position in the entire NHL.

Goaltender Sergei Bobrovsky also deserves a large share of credit for the team’s hot start, as he has been impressive in the net in what has been a bounce-back season.

Bobrovsky had a rough year in 2015-16, dealing with injuries throughout the season, and when he was on the ice, most of it was not pretty.

The 28-year-old started 12 of 13 games this season, which in itself is impressive, considering the way many teams are turning to a two-man goalie system, and is 7-4-1 over those 12 starts.

His three shutouts are tied for the most in the NHL this season.

Bobrovsky allows an average of 2.3 goals per game, which ranks 13th among goaltenders with at least ten starts, putting him in the top half of NHL goaltenders in that category.

Whether this hot start for both the offense and the defense will continue is yet to be determined, but 13 games is a large enough sample size to say this team has proven it can be competitive when playing its best hockey.

The four regulation losses this season came against Boston and San Jose, who both beat the Jackets twice, but aside from those two teams, the Jackets either won or earned a point in the nine other contests.

This three-game stretch, starting with the Capitals at home on Tuesday, will be a good measuring stick for this young team.

The Jackets take on the division-leading New York Rangers at Nationwide Arena on Friday night and then travel to Washington to play the Capitals again on Sunday.

Both teams are in currently in the top three in the Metropolitan Division standings and the Rangers (12-4-0) own the second-best record in the NHL.

If Columbus can come away with three points out of that three-game stretch, it’d be another sign that this team is ready to be taken seriously as a playoff contender.

Based on their great start at home, it’s certainly not out of the realm of possibility for the Jackets to win two out of three this week.

If you’d like to check out a battle between two great hockey teams, head down to Nationwide on Tuesday or Friday, as the home ice advantage is heating up with every win.