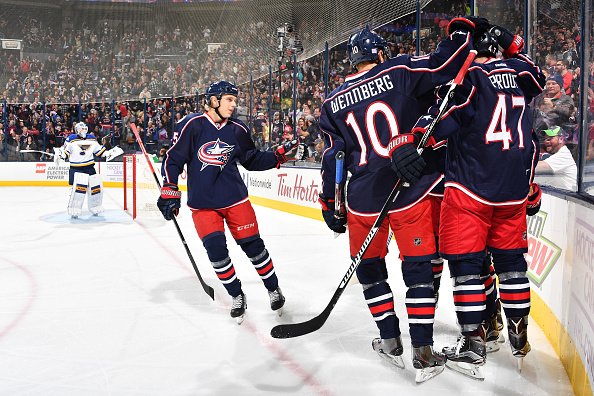 It was another one of those nights in Columbus for the CBJ, and by those nights…I’m talking about the nights were fans pack into Nationwide Arena and chant “We want 10.”

For the second time in a week, the CBJ had fans asking for ten goals. First against the NHL’s league leader Montreal Canadiens, only to be followed up by a Western Conference Finals contender.

Although the fans wouldn’t get the 10 goals they were looking for, they would get something just as good…another bit of reassurance that the Jackets are for real.

The Jackets took on the St. Louis Blues for the second and final time for the season Saturday night. This was the CBJ’s only matchup against the Blues at home. The Jackets couldn’t quit pull out a win in the first matchup, losing 2-1 in overtime in St. Louis earlier in the month.

The Blue Jackets would rebound. Not only from the earlier loss in St. Louis, but also from a tough loss Friday in Boston.

Columbus would go on to hand out a rather severe beating to the Blues, 8-4.

Columbus got off to a quick start, when Sam Gagner scored the games opening goal 2:34 into the first period. From that point on, it was a CBJ goal party, and everybody was invited.

The Blues would pull goalie Jake Allen after giving up four goals on only 12 shots. Gagner would account for 2 of those 4 along with one from Nick Foligno and one from Alexander Wennberg.

Nick Foligno and Sam Gagner are now tied for the most goals on the team, at 6 each.

The Blues would go on to turn to goalie Carter Hutton but the story remained the same…a goal frenzy. Hutton gave up three goals on 7 shots, to the CBJ go up 7-2 after two periods.

The three goals scored on Hutton would come from Brandon Dubinsky, Markus Nutivaara, and Williams Karlsson.

Just like the first crushing blowout, assists were coming from everywhere. Cam Atkinson would go on to lead the night with 4. Five other players would rack up two assists each, including Foligno, Saad, and Jenner.

Despite the offensive performance from the CBJ, the Blues were able to cut the lead in half by scoring two goals in the third period.

Rookie Zach Werenski continued his great start, scoring his fourth goal of the season in the third frame.

All four of the Blues’ goals Saturday night were scored during a power play. That had both Head Coach John Tortorella and team captain Nick Foligno a little concerned.

“We shot the puck and it went in the net” Tortorella said. “It’s not going to happen that way often. We need to understand how we’re playing, not what the score is, as far as the checking part of the game, as far as our sticks. A lot of little things in the game. We’re going to continue to work on that.”

Foligno has similar things to say, “I still think we’ve got a lot to improve in our game. I didn’t like some of the decisions we made. It’s hard when you get up that fast. But I’m not taking anything away from the win, it was a big win at home”

This sounds like something you want to hear out of a great team captain and head coach. Regardless of the big win, both men still want to fix things that will allow the team to only get better.

It’s that type of leadership that allows teams evolve and constantly get better. Building a winning team is a challenging process, It takes the right combination of coaching and player development and we’re starting to see some of that process pay off in Columbus.

The Blue Jackets will get two days off before going back to work Tuesday against Washington at home.