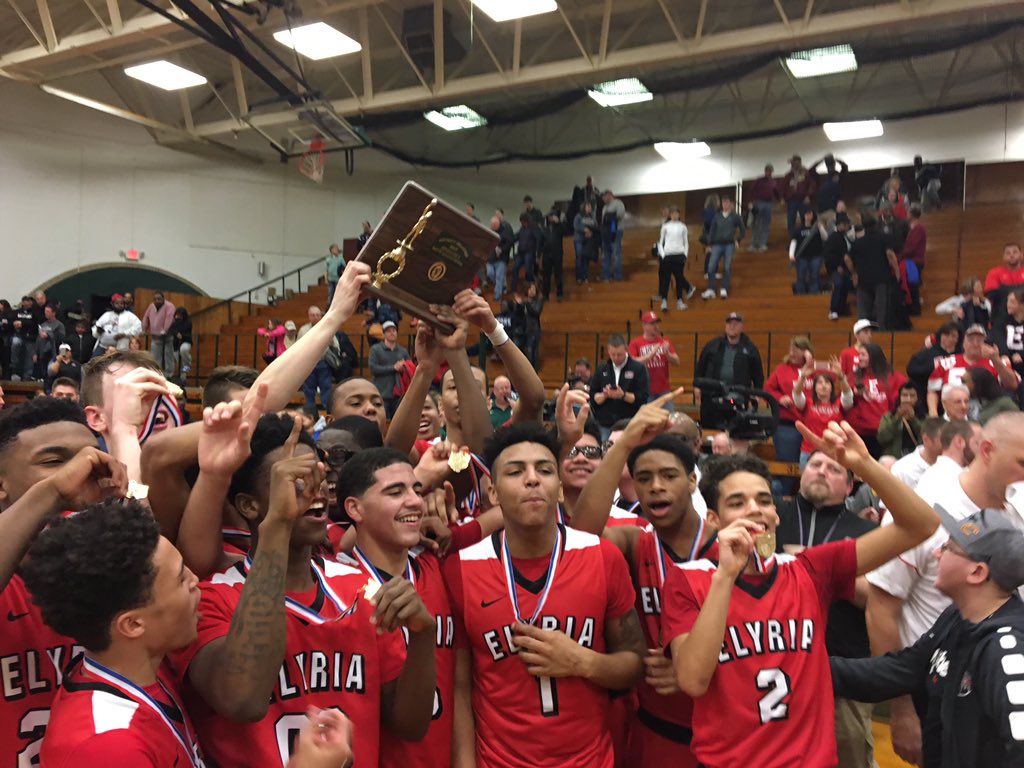 ELYRIA– In Lorain County, high school basketball doesn’t get much better than Lorain versus Elyria.

That’s evident by the fact that the district final match-up between the two was sold out about four hours before tip-off on Saturday. As fans entered the school, scalpers waited outside buying and selling tickets.

The game itself lived up to the hype.

In front of a sold-out crowd, the Elyria Pioneers topped the defending district champion Lorain Titans, 55-47. For the Elyria seniors, it was the first time in four years they found themselves on the winning end of a battle with Lorain.

“All four years of high school, we’ve never beat them and this year we just knew that we were capable,” senior Antonio Blanton said.

In the end, it was the seniors that guided the Pioneers across uncharted territory. Josh Lotko led the way with 17 points, while Blanton added 13 and Dezman Brown contributed 12. Naz Bohannon and Devone Grant led Lorain, with 17 and 14 points, respectively.

The Pioneers came out of the gates strong and jumped out to a 12-4 lead in the opening four minutes, forcing Lorain to call a timeout. A few key possessions from Bohannon ultimately closed the gap in the first, but the Pioneers finished with a slight edge, 14-13.

Lotko got hot near the opening of the second quarter, rattling off six quick points, but just as important as their start to the quarter was how the Pioneers ended it.

After a Grant layup gave the Titans a 25-24 lead, Blanton came down and hit a jumper with about a minute left. The next possession, Brown hit a dagger three-pointer of his own from the left baseline to give Elyria a five-point lead at halftime.

“Someone said ‘air-ball,’ they thought I was gonna air-ball it, but I made it and shot with confidence,” Brown said of his shot. “And I did it off of a rebound, so I hustled for my team and I got the shot.”

Perhaps the most important stretch of the game was the opening 3:50 of the third quarter. The Pioneers held Lorain scoreless in their zone, and built on their lead to go up by nine, 34-25.

“We did [the zone] to kind of just test the waters in the second quarter and they were missing some shots so we kind of stayed with it,” Larrick said. “Then we were debating the second half do we start in our zone, or do we go back to man, and we started with the zone to see if we could rebound.”

The gamble paid off. Lorain closed the gap to five, but Elyria pushed the lead back out to 10 heading into the fourth quarter.  Ultimately, that defense was the deciding factor, as Lorain never gained a lead in the second half.

For the third week in a row, the Pioneers are champions after winning their conference and a sectional title in close and hard-fought games. Those games no doubt prepared them for their district championship.

“So many close games have come down to the end,” Larrick said. “The last two minutes, the last minute, the last possession. So we told our guys this is what we do every game. And we said just be us, play together, and do what we do.”

The Pioneers advance to the Akron/Toledo regional semi-finals, and will play Toledo St. John’s Jesuit at the University of Toledo on Wednesday, March 15 at 7 p.m.