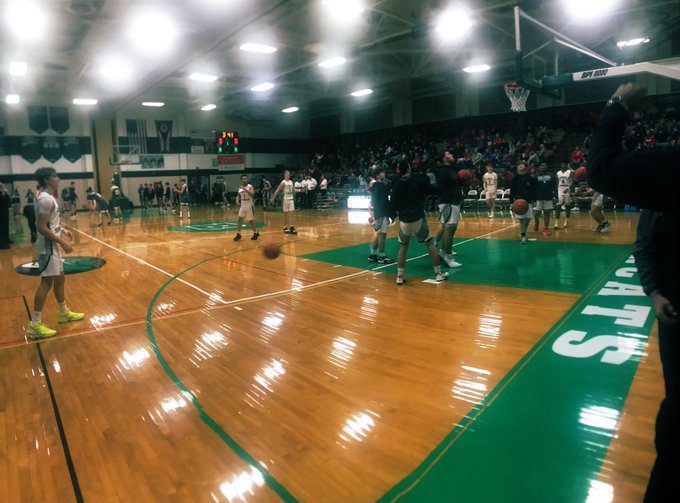 BEDFORD, OHIO – Playing in their first district game since 1999, Crestwood had a monumental challenge ahead of them. That challenge was Elyria Catholic, a well rounded private school who finished second in the Great Lakes Conference this season.

Crestwood was ready to go toe-to-toe with any opponent that stood in their way this season, but Edward Wright and his Panthers were able to hold off a feisty Red Devil squad 58-56 on Tuesday night.

While Elyria Catholic ultimately came away with the victory, Crestwood junior Trent Jakacki was the player that had the crowd in awe, especially in the first half.

Jakacki was red hot from the opening tip, connecting on a pair of three pointers early on. He easily outscored the entire Elyria Catholic team with a 10 point first quarter, as his team built a 15-6 lead heading into the second.

The Panthers were able to shake off their nerves moving forward, surging back behind 12 combined second quarter points from their senior backcourt of Edward Wright and Jack Griffin.

Jakacki continued his electrifying performance, as his 18 first half points led all scorers. If Elyria Catholic wanted to move on in this tournament, they would have to find a way to contain Jakacki. They trailed 29-23 at halftime, with their season hanging in the balance.

Pittsburgh offensive line commit Branson Taylor was a force in the paint, especially in the second half.

Standing at 6-foot-6, 290 pounds, Taylor was able to draw several key fouls throughout the second half. In the third quarter alone, he was 5-for-6 from the line. He finished the game with 16 points backed by an 8-for-10 performance from the line.

Elyria Catholic was able to contain Jakacki in the third quarter, holding him to five points in the frame. The Panthers were able to gain the lead before falling behind 41-40 with one quarter of basketball to play.

Taylor continued to come up big in the second half, putting together a personal 5-0 run to give his Panthers a 49-42 lead with 4:20 in regulation. Crestwood was having a tough time putting together any type of offense, and it looked like Elyria Catholic was ready to put this game away.

But just like they have done all season long, Crestwood kept fighting.

Jakacki had gone through a little bit of a cold stretch, but he was fully prepared to put the weight of his team on his back when it mattered most. He went on a personal 6-0 run to give Crestwood a 56-55 lead with 36.1 in regulation.

A personal 6-0 run by Trent Jakacki has put Crestwood ahead of EC 56-55 with 36.1 in regulation. He has 27 points.@cwoodreddevils @ECHSAthletics pic.twitter.com/KyufaoD9sS

Trailing by one in a “do or die” situation, Edward Wright knew the ball was going to be in his hands.

Wright hadn’t had a real dominant performance like Jakacki had, but he was always there for a bucket when momentum started to swing.

With 20.5 in regulation, Wright buried a three pointer that was heavily contested by Blaze Angle. This may have been one of the biggest shots of Wright’s career, as it ended up being the game winning bucket that would propel his team to the district final.

Crestwood went to the red hot Trent Jakacki for the final shot, but he wasn’t able to draw iron. With the sound of the final buzzer, Elyria Catholic was able to hold off Crestwood 58-56 to advance to the district final.

Jakacki scored a season high 30 points, but there just wasn’t enough scoring help from his teammates to come out on top. Mason Angle was the only other Red Devil who hit double figures, finishing with nine points in the second half and 12 in the game.

#3 Crestwood finishes the season 20-4, with a Portage County Conference and Bedford sectional titles under their belt. The Red Devils will lose five seniors after this season, but they will have a solid core of talent going forward.

#2 Elyria Catholic improves to 18-6 with the victory. They will advance to face #4 Warrensville Heights on Friday, with a district title on the line.

Edward Wright’s Game-Winner, a Moment He Was Made For in Elyria Catholic’s Win Over Crestwood
Boys HS Hoops: Shaker Heights Dominates Warren Harding to Advance in D1 District Semi