Edward Wright’s Game-Winner, a Moment He Was Made For in Elyria Catholic’s Win Over Crestwood 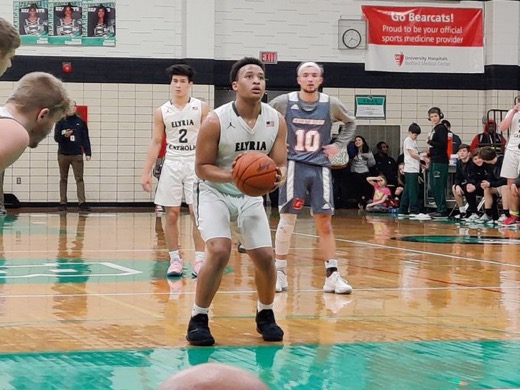 To quote from “The Miracle on Ice.” “Great moments come from great opportunities.”

Inside the gymnasium of Bedford High School, an opportunity came to the No. 2-seed Elyria Catholic Panthers as they trailed No. 3-seed Crestwood Red Devils 56-55 with 36 seconds remaining in the Division III, Bedford District semifinal.

Panthers’ guard Edward Wright received a pass from and screen from Connor Trockley before draining a game-winning 3-pointer with 22 seconds remaining to give them a 58-56 lead and win over Crestwood to seize a great moment.

“(Panthers’ Coach Rob Palmer) called that timeout and I knew they were drawing something for me,” Wright said after their win.

“It’s a great feeling to know that my coaching staff knows that I’m the guy… I know I believe in myself and that I can make those shots. It’s just great to see all the hard work I put in the summer in the gym all the time pays off with shots like that.”

On that play, there were mainly two scoring options for the Panthers.

“I was actually the first [option],” center Branson Taylor said. “But, when (Wright) came off that little dribble handoff [from Trockley], I knew it was going in the moment he stopped and popped it. In my head, I knew we’re going to win this game.”

According to coach Palmer, the play was drawn up so their two top players would get the ball.

Branson would receive the ball from Trockley from the left wing to the left block.

Trockley would then set an off-ball screen for Wright, who would circle the 3-point line from the left corner to, towards the top of the key, setting up a catch and shoot for him if he was open. If he wasn’t open, Taylor, with the size advantage, would try and score from the post.

Wright struggled in the first half against the Crestwood defense and even officiating, as he was called for offensive fouls prior to teammates making shots that were voided.

Wright made the shot, but the uncanny trust amongst his teammates and vice-versa, is what takes the moment to another level.

“Trust is a two-way street. So, that’s why, I think in the last four weeks, you’ve seen us roll off seven-straight victories, because, in the course of a team and in a course of a season, they start to really gel and start to come together.

Wright finished the night with a team-leading 19 points while shooting 46.6 percent from the field (7-of-15). He also grabbed seven rebounds, two assists and two turnovers.

Despite the win, Wright felt like he didn’t play to his standards and will be ready for the next game.

“The next [game], I have to come out better. It’s just about getting in the gym and getting some shots up. It’s kind of my off night, but next time, I’m going to be good.”

Elyria Catholic advances to the District final and will face Warrensville Heights, a team they defeated in the first round of last year’s tournament 69-66.