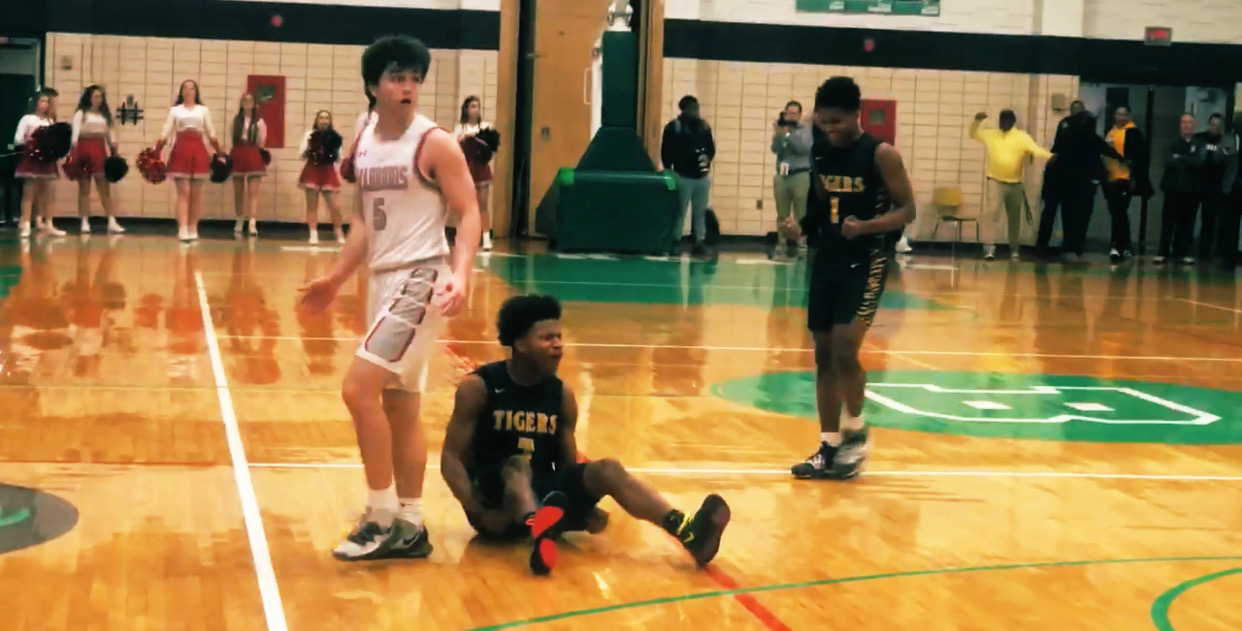 BEDFORD, OHIO – It was a classic playoff atmosphere at Bedford High School on Monday night. The bleachers were packed, excitement was in the air, and both teams had a little extra fire in their eyes.

It was expected to be a competitive, high scoring affair. What those in attendance got was an instant classic that will be remembered as one of the best games of the 2019-2020 season.

The first quarter provided a little taste of what was to come throughout the ballgame. Back-and-forth action, with Fairview holding a 20-19 edge. The quarter featured a 9-0 run from Warrensville, fueled by an eight point frame by Omahn Dobbins.

Noah Mesaros also had eight points in the first quarter, as he was a bully in the paint.

9-0 run for Warrensville gives them an 13-10 lead over Fairview with 2:30 in the first. @FPWarriorSports @Warrensville_BB pic.twitter.com/iRuStTBRBH

The game continued to teeter back and forth in the second quarter, until around the halfway point. Luke Howes led his Fairview team on a 15-4 run heading into halftime, giving them a 44-37 lead.

Fairview shot 62% from the field in the first half. Warrensville was able to counter that with a multitude of second chance points, as they outrebounded Fairview 20-12 in the frame.

Junior Ethan McQuate connected on a few big shots, finishing the third quarter with eight points. However, it was Ramelle Arnold who began to steal the show.

Arnold, whose 21.4 points per game is tied for sixth highest in the Cleveland area, scored 23 points in the second half, including 12 in the third quarter. He capped off his dominant quarter with a contested buzzer beater to trim the Fairview lead to 63-62 heading into the fourth.

Warrensville cuts the deficit to one on this incredible buzzer beater by Ramelle Arnold.

Both teams left it all on the court, but two players continued to come up with a seemingly endless amount of clutch shots.

Those players were Howes and Arnold.

Howes delivered with a powerful and-1 to put Fairview in front 81-78 with 1:30 in regulation. He scored 13 of his 36 points in the third quarter.

Then about a minute later, trailing 85-81, Arnold attempted a deep three pointer through contact from Marty Rehor. He miraculously connected on the attempt. The junior calmly completed the four point play to tie the game at 85-85 with under a minute to play

After Fairview regained the lead late, Trezzell McQueen converted a contested layup to tie the game 87-87.

On the ensuing inbounds pass, DeAngelo Bell and Brandon Jones double teamed Howes, who lost possession out of bounds with seven seconds in regulation. Arnold’s buzzer beating midrange attempt missed off the back rim.

Even though Warrensville couldn’t end the game in regulation, that forced turnover was a monumental play in this game. It kept Fairview from getting a chance to win it at the buzzer. With the offensive firepower of the Warriors, one late shot could have sent Warrensville home.

After that, it was bonus basketball time in Bedford.

Both teams continued to exchange baskets before Dobbins came up with a momentum swinging three pointer to give Warrensville a 94-91 lead with 1:51 in overtime.

Howes did everything in his power to keep Fairview within reach. The Walsh University commit had seven of his teams nine points in overtime, including a gritty layup to cut the Warrensville lead to 96-95 with 35.7 in overtime.

Warrensville leads Fairview 96-95 with 35.7 in OT. Luke Howes has been clutch all night long, but Ramelle Arnold and company are holding on. pic.twitter.com/FLzIfw0fJE

Arnold and Trey Washington were able to make all four of their late free throw attempts, putting this district semifinal game out of reach. Warrensville Heights pulled off the upset, taking down top seeded Fairview 100-96 in what some are calling the “game of the year”.

One of the key statistics of the ballgame involved free throw shooting. Fairview was 10-for-17 (58.8%) from the free throw line in the fourth quarter and overtime, while Warrensville was 7-for-7 (100%) in that same span.

Fairview ends their season at 18-6, as Howes, Mesaros, and the rest of the senior class will have to move on from their high school careers in heartbreaking fashion. They left everything they had on the court, but in the end, it just was not enough to contain the Tigers.

Warrensville Heights gets back above .500 as they improve to 13-12. They will look to punch their ticket to regionals on Friday when they go up against either Elyria Catholic or Crestwood.

Boys HS Hoops: Lakewood Rallies To Stun Midview 50-43 In Overtime Thriller, Advance To Districts
Edward Wright’s Game-Winner, a Moment He Was Made For in Elyria Catholic’s Win Over Crestwood