In Complete Control: Indians Dominate Cubs 7-2; One Win Away From Title 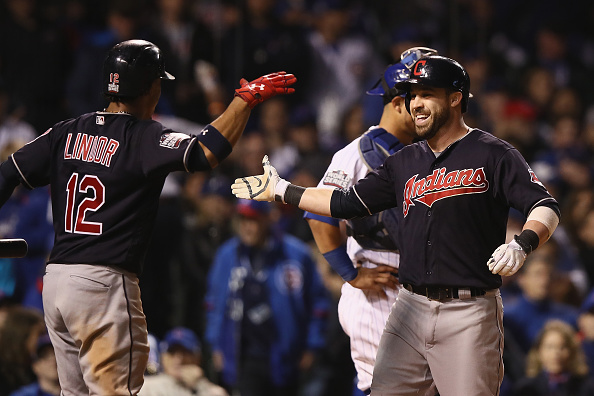 Where do you even begin? When the Indians left Progressive Field following Wednesday night’s 5-1 loss to the Chicago Cubs to put the best-of-seven World Series at game apiece, not many could have imagined 72 hours later how the series would look.

And most couldn’t have imagined the Indians having a complete stronghold on the World Series, being just one game away from closing it out.

That’s where we stand after Saturday night’s dominating win over the Cubs, 7-2 at Wrigley Field, which by the time Jason Kipnis clinched the game with a three-run blast in the top of the 7th, was in full hush mode.

With the ‘us against the world’ mentality, the Indians have a team that won 103 games and nearly every CBS expert picked to win the Series on the brink of not even being able to make a return trip to Progressive Field.

The Tribe has outscored the Cubs 14-7 in four games thus far, and have a chance Sunday to end this thing in dominating and stunning fashion.

Here’s a breakdown of the moments of Game four with a quick look to game five.

Part of the reason the Cubs still felt good about this game despite a 1-0 loss on Friday was the fact they were confident they would have better results the second time around against Corey Kluber. Instead, he was as good, if not better, Saturday night at Wrigley against a desperate Cubs team looking for anyway to get going. The Tribe ace (if things stay as is), should add some hardware after the Indians win this series – that of MVP. He’s 2-0 with a 0.75 ERA in two World Series starts. He allowed a run in six innings of work, giving that run up in the first inning which at the time could have been the Cubs shot to get something going early. Instead Kluber settled in, and the Cubs had no answers as he struck out six and walked just one.

The Cubs played more like a team on the road that were looking to force things to try and make things happen, and ended up making some bad mistakes because of it. Case in point the dribbler by Kluber in the second that scored a run after a bad throwing error by Kris Bryant. Plus the Cubs at the plate seemed anxious all night, not using the same patience at the plate the Indians did to eventually force John Lackey to throw 84 pitches in five innings. It’s nail biting time for the Cubs and their fans, and it’s as if you can feel at this point how the noose is tightening around their necks.

Before the game twitter was abuzz about the decision by Terry Francona to sit Mike Napoli, start Rajai Davis in left, and hit Carlos Santana in the four hole playing first. Never again should the Tribe skipper every get questioned about such a decision. Santana hit a solo homer to tie the game, Davis was 1-for-4, and Napoli still got in the game and got a chance to pinch-hit. Francona just knows this team and the situations, and he’s been pushing the right buttons in the playoffs since his time with Boston. From now on, let him manage – and if he makes a mistake THEN you can come down on him. Not before.

The 22-year-old Tribe shortstop has been incredible for most of the playoffs, with the two-run homer to get the team going in game one against the Blue Jays. Consider the following for Lindor during the World Series – 6-for-13. Wow. In the playoffs overall he’s batting .364/.391/.568, and has been a spark plug on offense. Plays he’s still playing the field at a high level, like the simple yet very
big play last night against the Cubs in the 8th with a runner on third and two outs

It’s like a dream, the Indians are 27 outs away from hosting their first World Series trophy in 68 years, and unlike 1997 when the series with the Florida Marlins was back and forth before the team eventually fell, this series in four games has been all Tribe minus the one hiccup in game two. The facts are pretty overwhelming that the Indians, even if they don’t do it on Sunday, will win this series. Only five teams in baseball history had come back from three-games-to-one deficits and win it, with the last team to do so was the 1985 Kansas City Royals, taking out the St.Louis Cardinals. With Kluber set to go again if needed, Tomlin sitting around waiting for game six, and the pen sitting in great shape, the Indians losing this series at this point is hard to even think about.