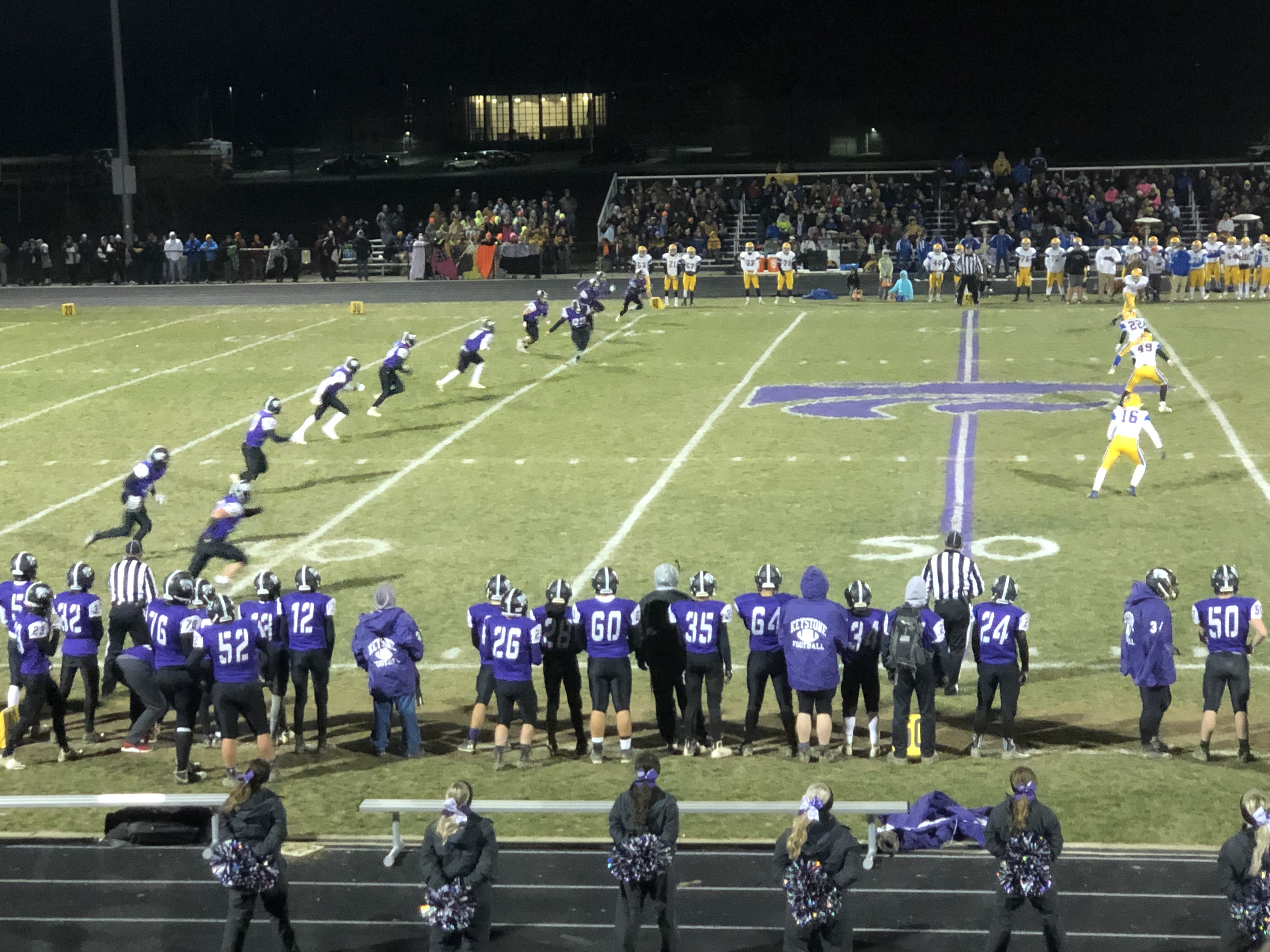 LA GRANGE, OHIO – Coming into this first round of the OHSAA playoffs, the Keystone Wildcats (9-1) had their minds set early in the regular season on a deep run in these playoffs.

The Clyde Fliers are coming off playing 5 playoff teams in the regular season, and although they had a tough schedule, still managed a winning 6-4 record and their 7th playoff appearance in a row. Keystone, was hosting their first home playoff game in school history, and the excitement was definitely in the air.

Keystone got an early momentum boost, after both defenses did a good job at holding their ground, it was a botched punt from Keystone, which then touched a Clyde defender with Keystone recovering the punt on their own 30 yard line with 6:02 left in the first. With that momentum, it set up a Deghan Rigda receiving TD making the score 7-0 Keystone after the PAT with 3:14 left in the first.

Keystone started off the second quarter increasing their lead, Dylan Naylor ran it in from the 4 yard line making the score 14-0 Keystone.

As halftime approached, it was Nick Webb putting Clyde on the board, cutting the Keystone lead to 14-7 with 2:27 left in the half, giving Keystone one last shot to extend their lead going into the half. But the offense couldn’t quite get there, as the score stayed deadlocked at 14-7 going into halftime

To start the half, Clyde got the ball, but they shot themselves in the foot, drawing a holding penalty calling back a 38 yard would be touchdown run from Gunner Golden. But they cleaned it up, on a screen pass to Carson Rieman going 30 yards for the touchdown, tying the game at 14 with 9:27 left in the 3rd quarter.

Clyde looked as though they were going to control the second half, after a Derick Coleman fumble recovery they took over on Keystone’s 41 yard line. It was now once again Rieman for Clyde scoring, making the score 21-14, it was 21 unanswered points giving all the momentum to Clyde’s favor.

As we started the 4th, it was still Clyde carrying all the momentum, sacking Keystone quarterback Jacob Shackelford 3 times as of 10:29 left in the 4th. Keystone couldn’t stop the Ryan Lozier to Carson Rieman screen passes. Clyde was dominating with that play all second half.

Penalties were plaguing both of these teams, as now it was Keystone drawing a roughing the kicker on Clyde’s punt attempt, putting Clyde in Keystone territory. With 5:00 left in the game, it was Adam Koviak catching a 20 yard TD pass, it seemed to be the dagger making the score 28-14, Clyde leading Keystone.

But the onside kick went too far, and Clyde recovered the kick and kneeled out the last 39 seconds, taking the game 28-20 and moving on to the regional semifinals.

St.Edward Flexes Their Offensive Muscle in 73-38 Win to Advance
OHSAA Announces the Second Round of High School Football Playoffs